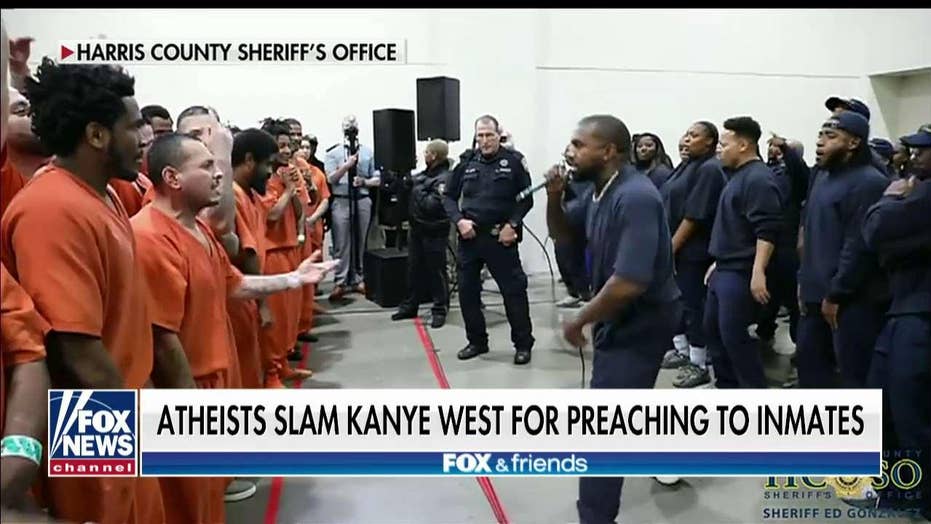 Last week the Freedom From Religion Foundation penned a complaint to the Sheriff's Office. Director of Strategic Response Andrew L. Seidel said that West's service was a "constitutional violation" which "is particularly egregious because it imposed religion on inmates -- literally a captive audience."

"It is no excuse that Kanye West is famous," Seidel wrote. "If anything, this makes the violation worse because the captive audience may be more receptive to his message."

Rep. Dan Crenshaw, R-Texas, whose district is in Houston, called it a "very cool move" by the "Jesus Walks" rapper.

Appearing on "Fox & Friends: Weekend" with hosts Ed Henry, Pete Hegseth, and Rachel Campos-Duffy, Jones asked, "Did they not see the photos?"

"Look, my grandmother is actually a chaplain for the state's women prison in Texas," he said. "And, you know, they support any type of religion that you may have, but it's funny that the only time there's attacks is when it's Christians."

Jones added that Texas is known for its seminary program and "a lot of people in prison become converts."

"And, they go to school and become pastors. And Texas, the correctional system, is known for that. So, you would think people that were former criminals -- no matter what they decided to choose -- that people would be celebrating that," he stated.

West performed for more than 500 inmates, including male inmates at one jail facility, before crossing the street to another for a smaller crowd of female inmates, where they could be seen joining along in worship and prayer.

"Kanye has turned over this new leaf and he wanted to share his faith. You have all these people that are clearly worshipping Christ, giving their life to Christ...shouldn't we be celebrating this as a country?" he questioned.

"This is anti-Christian rhetoric going on; that's the bottom line," Jones concluded.