Angle: Voting with their feet

Laura Ingraham discusses how Americans are fleeing blue states for red states and how Californians see crime as a big problem on ‘The Ingraham Angle.’

Laura Ingraham discussed why Americans "want to get the hell out of" blue, liberal-run states in droves and head to freer red states on "The Ingraham Angle."

LAURA INGRAHAM: Judging by the latest census data, maybe you've seen it, people want to get the hell out of California, Illinois and New York. Those three states all registered the sharpest overall population losses last year. So where the heck is everyone moving?

LAURA INGRAHAM: LIBERALS LOVE TO FAWN OVER EUROPE, EVEN WHEN IT'S COLLAPSING

Well, one of the most popular places to relocate from high-tax blue states is without a doubt here in Florida, which saw its population increase by 211,000 between July 2020 and July 2021. And by the way, it's not just people moving. Of the 5.8 million new businesses and applications up between January 2021 and January 2022, a stunning 12% were right here in Florida. Now, with these numbers, it's no wonder that Florida Gov. Ron DeSantis is way up in the polls in his reelection race. And nationwide, he's building a profile and an impressive fundraising operation.

With all the above, all those things we just talked about, liberal governors with ambitions for national office have the knives out for him, including that walking pile of hair gel, Gavin Newsom. Although he easily defeated a recall effort, his state is reeling from high crime, under-performing schools, a glut of illegal aliens, a water shortage and high taxes. And instead of addressing that reality, Newsom lashes out. 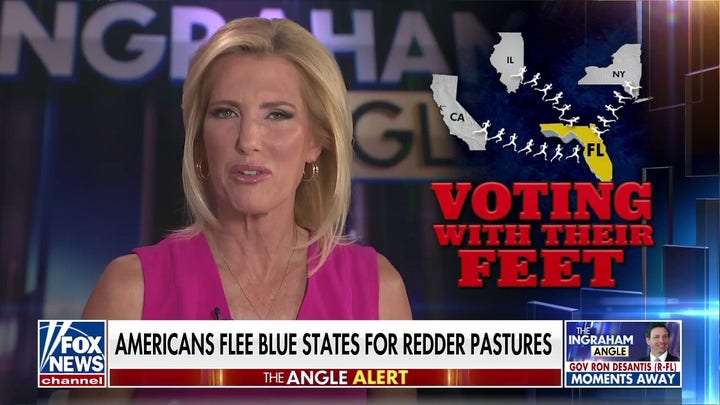