"They think the American people... are morons and won't notice, but they did."

"It's why so many Americans think there's no intelligent life in Washington, D.C.," he said. "This is what many Americans heard. Members of Congress say, 'Oh, my God. We could run out of ventilators. Oh, my God, people could die quickly. Let's give money to the Kennedy Center and the post office now.' That tells the American people that common sense is dead. Nonetheless, those of us who are fiscal conservatives, we swallowed it. We had to, we passed the bill. I think it's going to help the American people," Kennedy told Maria Bartiromo.

"But," he added, "a pox on the house and houses of all those members of Congress who took advantage of this disaster, this tragedy, to take care of their pet projects."

Many Republican lawmakers criticized House Speaker Nancy Pelosi, D-Calif., saying she used the crisis as leverage to try jamming through a political "wish list" of unrelated items. Kennedy said they included a provision to speed up the FDA review process of sunscreen products, funding for the National Endowment for the Arts and additional cash for the post office.

"It's not a priority right now," Kennedy said. "I think once we drill down, we're gonna find out that she's [Pelosi] not the only one. I think some other people in powerful positions piled on, and I don't like it, and it's not fair to the American people." 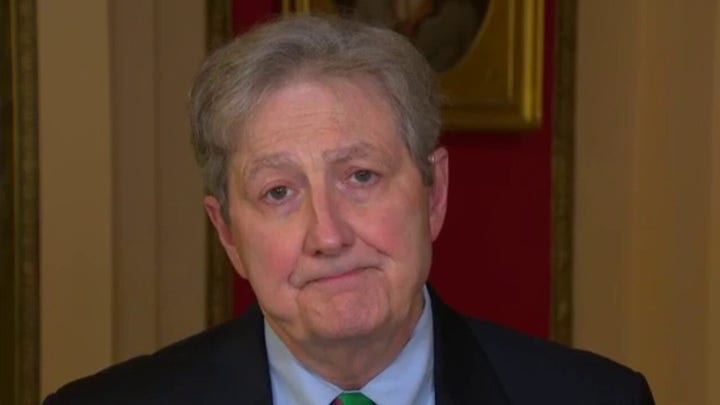 Pelosi, for her part, has pointed the finger at Trump, saying he downplayed the seriousness of the coronavirus and delayed ramping up the federal government’s response to it -- claims the White House has denied.

Kennedy's state has been a "hot spot" of the coronavirus outbreak in the U.S., with over 3,300 reported cases to date. The Louisiana senator has been focussed on "saving lives" while "also trying to save livelihoods" and despite his criticisms, his people will rely heavily on the economic relief bill for help, he explained.

"We are coping. We have about 3,300 cases, we've had around 130 deaths, we're clearly a hot spot. It began in New Orleans and it's kind of moving out through this, throughout the state," Kennedy said.

US DRUG INDUSTRY AIMS TO WRESTLE BACK MANUFACTURING FROM CHINA

Kennedy later said the coronavirus pandemic underscored the importance of securing America's medical supply chain and ramping up production of life-saving medicines to end the country's long-time reliance on the Chinese government.

"Sometimes, the cheapest is not in your national interest, and right. We may be able to back components for pharmaceutical drugs cheaper in China, but we've learned through this experience that that may not be in the national interest," he concluded. "And, after this is over, we beat the virus and we will, you're going to see some change, though, long overdue."