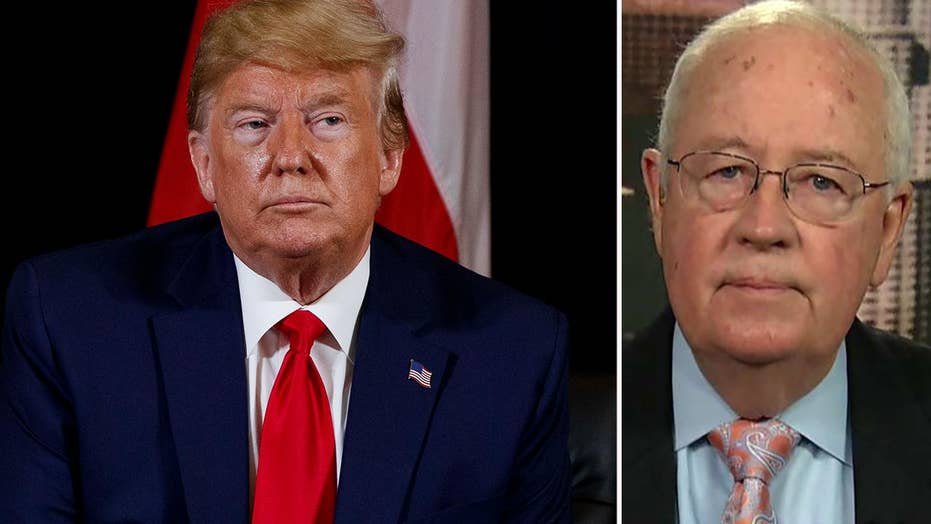 Fox News contributor Ken Starr said Tuesday that the White House should not "rush" to release a transcript of President Trump's phone call with the president of Ukraine that triggered a whistleblower complaint and calls for impeachment from some House Democrats.

Trump was accused of pressuring President Volodymyr Zelensky to investigate Joe Biden in connection with his son Hunter's business dealings in Ukraine.

The furor began after a whistleblower complaint was reported last week that involved allegations that Trump made an unspecified “promise” to Zelensky. The Trump administration pushed back Tuesday against accusations that Trump pressured Zelensky over Hunter Biden while also holding back nearly $400 million in aid to Ukraine.

Starr, a former independent counsel and U.S. solicitor general, responded on "America's Newsroom" to Democrats who are demanding that the White House release the transcript of the call.

"Not at this time. I don't think there should be a rush. There are dangers, the precedent of any president making public transcripts of confidential conversations," he said.

Starr said all calls between a U.S. president and a foreign leader are "sensitive," suggesting a negotiated solution between the White House and the Senate Intelligence Committee in the interest of "accountability and checks and balances."

"There are different ways of calibrating and negotiating this, but don't rush to publish," Starr cautioned the White House.

"We live, I know, in the age of transparency. But that has to be balanced against an enduring presidential interest in carrying on the foreign policy of the United States in a responsible way."

Biden has acknowledged that during the Obama administration, he successfully pressured Ukraine to fire its top prosecutor, Viktor Shokin, who was investigating the natural gas firm Burisma Holdings where Hunter Biden was on the board.

Trump and his allies have openly voiced concerns about the now-Democratic presidential candidate's role.