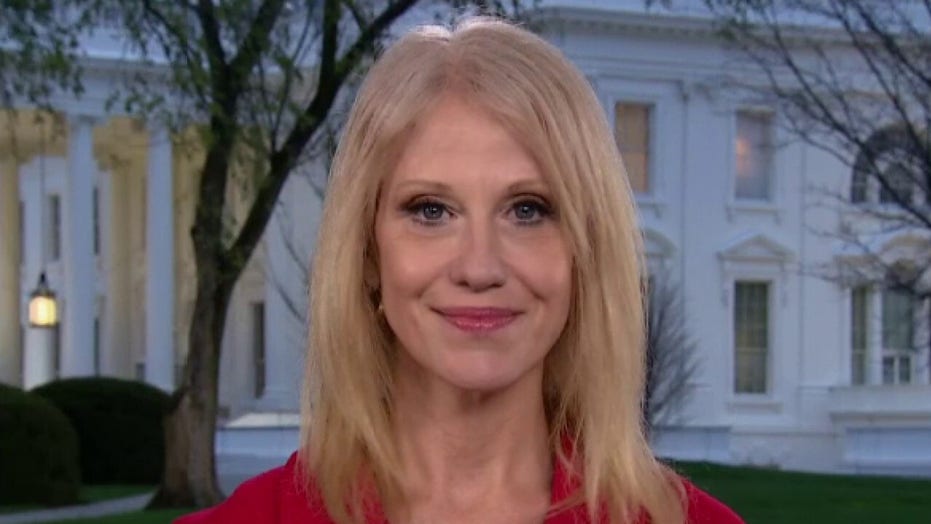 Kellyanne Conway on stimulus negotiations between Senate and White House

Counselor to the President Kellyanne Conway accused New York City Mayor Bill de Blasio of "lying to America" on "The Story" Wednesday after de Blasio told host Martha MacCallum a day earlier that he had taken the coronavirus crisis seriously from the outset.

Conway pointed to a March 2 tweet from the mayor in which he encouraged New Yorkers to "go on with your lives [and] get out on the town despite Coronavirus." His tweet came a day after the first case of the coronavirus was announced in New York City.

"On March 16, he went to a gym, he has taken the subway ... it's totally irresponsible," Conway said.

60 PERCENT OF AMERICANS AGREE WITH TRUMP'S HANDLING OF CORONAVIRUS: POLL

As New York becomes the epicenter of the outbreak in the country, with more than 20,000 confirmed cases, de Blasio has been on the front lines criticizing the president's handling of the crisis. On Tuesday, the mayor publically rejected Trump's hope that the economy would be up and running again by Easter Sunday, April 12, saying he thinks “April is going to be a lot worse than March” and fears that May could be even worse for New York.

"I think it shows you the contrast in leadership when you have feckless leaders or you have a president who's publicly-facing every single day giving people information and engagement they need," Conway said, referring to the president's daily task force briefings.

When MacCallum suggested that de Blasio's early comments downplaying the coronavirus were similar to those of President Trump's at the onset of the outbreak, Conway was quick to fire back.

"There's no comparison between the two leaders."

"There's no comparison between the two leaders," she interjected.

"In this White House, my very chief of staff started doing meetings on this on January 12. There have been groups meeting on this all along and today is the one-month anniversary of the task force being announced," she went on.

Conway pointed to a new poll which shows 60 percent of Americans approve of the president's handling of the virus, putting his approval numbers at the highest they've ever been throughout his presidency.

" He [Trump] never had this high marks in handling the economy even though he deserved it. He's had high marks because he is handling a health crisis that came out of nowhere and people appreciate the fact that every single day they are hearing from the task force."

Conway also commented on New York Gov. Andrew Cuomo's comments ripping the Senate’s multitrillion-dollar coronavirus response package as being “terrible” for his state and arguing that the $3.8 billion in relief for his state it would offer is only a “drop in the bucket.”

"We are helping them meet this crisis where it is and we are continuing to do that, we’re surging the supply capacity... 435,000 Americans have been tested, that has increased explosively.," she added. "We are working on this every single day and we will continue for New York and everyone else."