As the impeachment fight between President Trump and House Democrats heats up, Rep. Jim Jordan, R-Ohio, said he wants the acting director of national intelligence to answer for the intel community's vendetta against the commander-in-chief, on "Fox & Friends" Thursday.

"Chuck Schumer told us...he previewed all this, clear back on Jan. 23rd, 2017 when it was President-elect Trump... If you mess with the intelligence community, they have six ways from Sunday at getting back at you," he said.

"We saw it in 2016 with what the FBI did. I think we're seeing it now with this whistleblower. So I think the director of national intelligence is going to answer those kinds of questions."

Joseph Maguire, who serves as head of intelligence, is set to face questions from lawmakers Thursday on Capitol Hill, over the complaint from an unidentified whistleblower about Trump's phone call with Ukrainian President Volodymyr Zelensky. 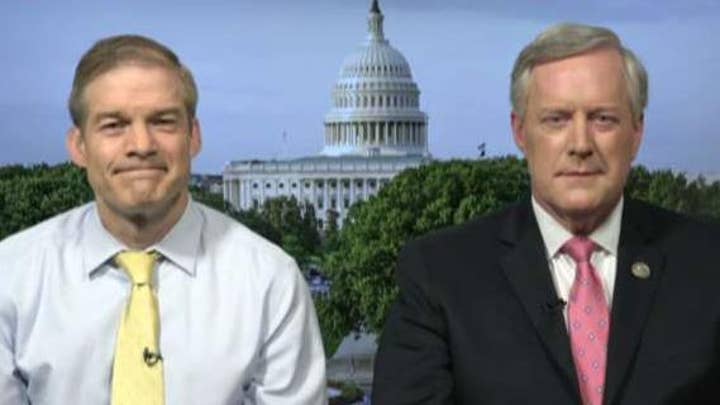 Democrats claim Trump abused his authority by asking Zelensky to look into Joe Biden and his son Hunter's business connections in Ukraine, while the president maintains he's being persecuted and did nothing wrong.

Jordan, who appeared with Rep. Mark Meadows, a North Carolina Republican, said Democrats are blinded by partisan rage and have disregarded facts in favor of taking down Trump at all costs.

Meadows said there was no "quid pro quo" from Trump regarding his request for the investigation and U.S. military aid to Ukraine, noting that Zelensky said he did not feel pressured by Trump during the call.