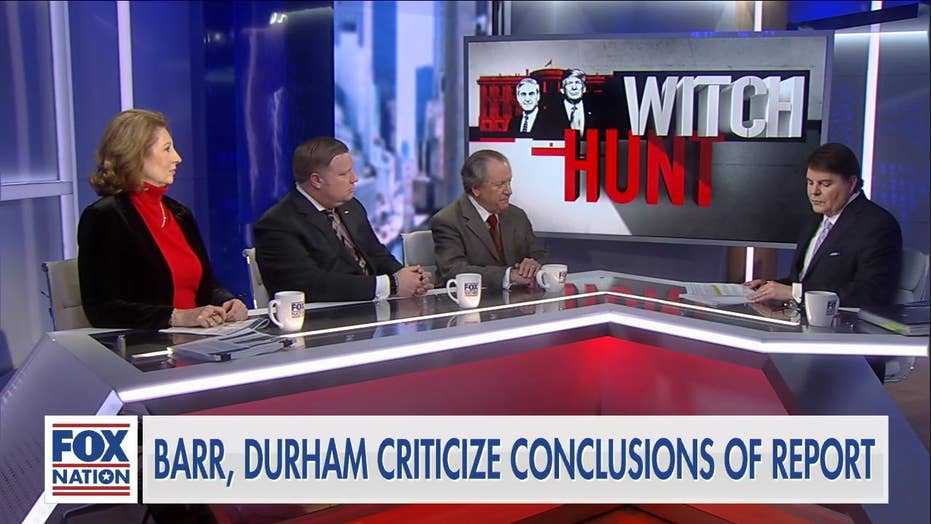 James Comey will go down as most corrupt FBI director ever: Expert panel on Horowitz report

Fox News legal and political analyst Gregg Jarrett asked a panel of defense lawyers and former federal prosecutors how ex-FBI Director James Comey will be remembered by history in the wake of the Justice Department Inspector General's report on the FBI investigation into the Trump 2016 presidential campaign.

The answers weren't good for the former FBI chief.

"You don't make mistakes when you're doing an investigation of this magnitude," said Parlatore, in reference to the 17 significant errors of omission in the FBI’s application to surveil former Trump campaign adviser Carter Page.

"We're not talking about a single person made a mistake. A whole team. A whole team," he continued. "They set it up so that there'd be redundancy. So there'd be supervision and supervision from the top. And so the ability to bypass all those safeguards to make mistakes is just not credible."

Jarrett noted that Comey is taking a "victory lap," going as far as appearing on CNN on Monday and accusing the attorney general of being corrupted himself by President Trump, and Comey repeated his claim that Trump is "eating his soul."

Comey also tweeted on Monday after the release of the Horowitz report, writing "So it was all lies. No Treason. No spying on the campaign. No tapping Trumps wires. It was just good people trying to protect America."

Parlatore said: "If you want to try and explain all of these things away as just mistakes and not evidence of bias -- is James Comey admitting that they do this all the time to other cases that are not politically involved and that they make this level of mistakes and intentional misstatements?"

"Comey says there was no spying because he doesn't define it by any logical definition," said former National Security Adviser Michael Flynn's attorney and former federal prosecutor, Sidney Powell. "But yes, they sent an agent into the presidential daily briefing... in August of 2016. And then that same agent went to interview General Flynn on January 24 when he had just arrived at the White House...  and did it particularly to give that agent experience engaging Flynn, getting to know him and how he reacted to things. So, yes, they went in and spied on him."

In conclusion, attorney and former U.S. Attorney Joe diGenova said that he expects John Durham, the federal prosecutor appointed by Barr to run a criminal investigation into the origins of the Russia probe, to find much more than mistakes.

"I don't think there's any doubt that this was a systematic, planned effort to do what they had to do to get Donald Trump," said diGenova.  "They started out by getting Michael Flynn. He was the guy they were going to use to be the shoehorn. And of course, they expected him to cooperate, perhaps make things up... the truth is this investigation from its inception was not only ill-conceived. It was illegally conceived."

To watch all of  "Witch Hunt" go to Fox Nation and sign up today.