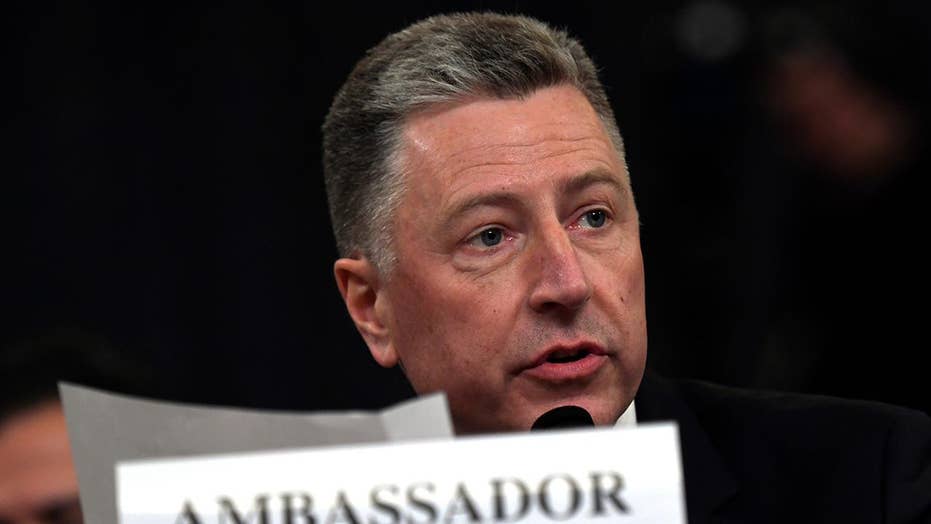 Amb. Kurt Volker: At no time was I aware of an effort to urge Ukraine to investigate Joe Biden

A lackluster impeachment hearing got an electric charge Tuesday when a key Trump administration diplomat changed his testimony to criticize the administration’s handling of Ukraine and vigorously defend Joe Biden.

Kurt Volker, the former special envoy to Kiev, is the second witness to revise his testimony, after Gordon Sondland, in what appeared to be a gift to the Democrats.

He dropped his previous insistence that there was no talk of investigations at a crucial July 10 White House meeting that was cut short by John Bolton. Volker told the House hearing that Sondland made a “generic comment” about investigations and “all of us thought it was inappropriate.” This put him on the side of several other witnesses who expressed concern about President Trump freezing military aid to Ukraine.

However, Volker said he must have left or been involved in a side conversation because he didn’t hear Bolton express his strong objections to what had just happened. And although he was a point of contact for Rudy Giuliani, he claimed to be “out of the loop” on the linkage between the aid and Ukraine promising to investigate the Bidens or its role in the 2016 election—a linkage he now calls “unacceptable.”

What’s more, Volker said he has known Biden for many years, that he deems the former VP an “honorable man,” and that allegations that he acted improperly with Ukraine “are just not credible to me.”

Volker remained doggedly low key, obviously trying to thread the needle between openly breaking with Trump and distancing himself from the withholding of U.S. assistance to Ukraine. He said he should have realized that the push for Ukrainian investigations was actually specifically aimed at probing the gas giant Burisma, which employed Hunter Biden.

But he opened himself up to charges of inconsistency, especially since he just happened to recall the mention of Ukrainian investigations after other witnesses recounted that—in more detail—at the meeting attended by Volker.

For the Democrats, the late afternoon admissions salvaged what had been a sleepy third day of hearings.

Lt. Col. Alexander Vindman, sitting ramrod straight with a chest full of medals, said flatly that “it was improper for the president to demand an investigation of a political opponent,” especially from a foreign power.

And yet his testimony was oddly anti-climactic.

True to his military bearing, Vindman was stiff, hesitant and by the book, answering questions at the House impeachment hearing in an unwavering monotone.

He says he conveyed concern about President Trump’s call with Volodomyr Zelensky “through official channels,” through the “chain of command,” acting only “to carry out my duty.” He bristled when ranking Republican Devin Nunes called him “Mr. Vindman” and asked to be addressed by his title.

Vindman’s military service as a career officer, including a Purple Heart, after his family fled the Soviet Union was admirable. But his testimony was far less compelling than the appearances of William Taylor and Marie Yovanovitch.

More important, virtually everything that Vindman had to say had already been leaked or released. He said John Bolton had abruptly ended a July 10 meeting after Gordon Sondland spoke of Ukraine’s need to investigate the Bidens and any role in 2016 hacking. He said he told a White House lawyer that Trump raising investigations with Ukraine’s leader was “inappropriate” and “had nothing to do with national security.” These points are important, but old news.

Vindman, to his credit, was so cautious that he when he was asked why the official readout on the Trump-Zelensky call cited anti-corruption efforts when that was not mentioned, he said it was common to include such messaging.

The lieutenant colonel had two noteworthy moments. One was when he said he could not deliver such testimony in his birthplace, the old Soviet Union. The other was when he said the attacks on last week’s witnesses were “vile” and “reprehensible.”

Jennifer Williams, an aide to Vice President Pence who listened to the July 25 call, said she found it “a domestic political matter.” But she didn’t have much behind-the-scenes information—she put it in Pence’s briefing book but doesn’t know if he read it—and no one landed a glove on her.

Williams said she was “surprised” when the president tweeted that she was a Never Trumper. She denied that, saying “I was not expecting to be called out by name.” Vindman said he is not a Never Trumper, he was a “Never Partisan.”

The Intel Committee session hit a snag when Adam Schiff accused the GOP counsel, and later Jim Jordan, of trying to out the whistle-blower by asking Vindman about his testimony that he’d told an intelligence community official about the Trump call. In the first instance, Schiff’s intervention led Vindman to decline to answer.

The president, at a Cabinet meeting, said he didn’t know who Vindman was and questioned why he testified in full-dress military attire.

Despite the unmistakably subdued tone of the morning hearing, some pundits were excited by the session.

MSNBC, which has abandoned a straight-news approach to the hearings, had its coverage anchored by host Nicolle Wallace, a former Republican who detests Trump (after Chris Matthews was the anchor on Friday). Wallace called the testimony “stunning.” Another liberal host, Ari Melber, said it was “devastating.” Former Democratic senator Claire McCaskill said part of it was “powerful.”

On CNN, whose coverage was anchored by journalists, John King said Republicans are “cherry picking” and their questioning of witnesses’ character is “a sideshow.” Jeffrey Toobin said Trump’s culpability “has been proven over and over again.”

On Fox, whose coverage was anchored by journalists, former special prosecutor Ken Starr said Vindman has “a great American story” but had acknowledged that there was nothing illegal about Trump freezing military aid to Ukraine.

Earlier, Nunes took direct aim at the media and the whistle-blower, even questioning whether the CIA officer has been in touch with journalists.

Nunes, who boasted that "TV ratings are way down," repeatedly insisted that the testimony of three career diplomats last week was far less important and dramatic than portrayed in media accounts. He then pivoted to Russia, reciting headlines from that investigation that he said were false.

I’m not one who believes the hearings have to be a raucous TV show. If there is damaging new information, it doesn’t matter if it’s delivered in a reading-from-the-phone-book tone. But it was Kurt Volker, not Alexander Vindman, who made news Tuesday by changing his story.