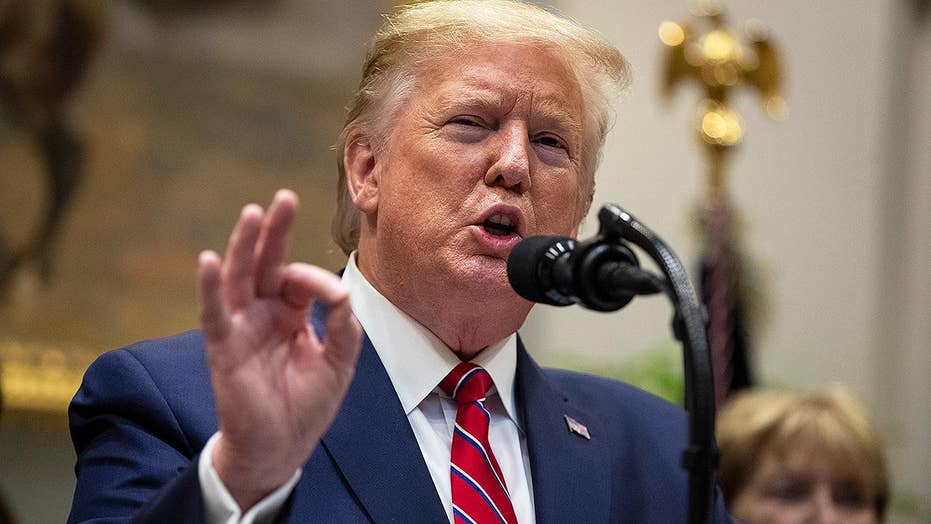 President Trump tweets a response to House Speaker Nancy Pelosi's call for him to testify in the impeachment investigation.

A new plot twist to kick off the second week of impeachment hearings: President Trump might testify!

Trump is a master showman who knows that dangling the possibility of such a dramatic move will launch a thousand cable debates.

Then, when House Democrats do something he doesn’t like, he can yank it off the table.

We spent a year or so mired in the will-he-won’t-he debate over whether the president would sit down with Robert Mueller. In the end, with strong objections from his lawyers, who feared a perjury trap, Trump provided only limited written answers—and Mueller didn’t recommend any criminal charges.

But for a president to offer any kind of testimony in an impeachment probe would be extraordinary.

The contretemps began when Nancy Pelosi, on “Face the Nation,” said she would welcome Trump coming forward. “The president could come right before the committee and talk, speak all the truth that he wants if he wants,” she said. The speaker probably thought it was a throwaway line.

That prompted some presidential Twitter action. After a swipe at “Nervous Nancy” and “Deface the Nation,” Trump said he would “strongly consider” testifying:

“She also said I could do it in writing. Even though I did nothing wrong, and don’t like giving credibility to this No Due Process Hoax, I like the idea & will, in order to get Congress focused again, strongly consider it!”

With news that the House is investigating whether the president was untruthful in his answers to Mueller, according to CNN, some people will conclude that the Democrats haven’t given up on the Russia angle and are taking a kitchen-sink approach.

Meanwhile, I wonder how much impact these hearings are having. We learned yesterday that the ratings for Friday dipped to 12.7 million, down from 13 million the first day. Both numbers are well below the audiences for the Brett Kavanaugh hearings and the testimony of Michael Cohen and James Comey.

On Sunday’s “Media Buzz,” panelist Jeanne Zaino said her 21-year-old son, rather than watching the hearings, was preoccupied with a new Pokemon game. Needless to say, I don’t get the sense that America is gripped by the suspense.

One reason: The Democrats leaked all the news before the witnesses sat down before the cameras. Another: A sense that the outcome—House impeaching, Senate acquitting—is preordained. Still another: Utter exhaustion with Trumpian drama after a two-year Russia investigation was quickly followed by the Ukraine mess.

The New York Times found much the same in interviewing voters across the country, including a man in upstate New York who said he took a nap and watched “Simpsons” reruns instead.

Jerre Corrigan in Wisconsin: “They want to grab you with those headlines. Trump did this, Trump did that. You have to go in and really research it. And I don’t think a lot of people do that…I don’t know that I’m getting the facts from the media right now.”

Matt Stanley in West Virginia: “The social media, it muddies up stuff so badly. There’s so much information that’s biased, that no one believes anything. There is so much out there and you don’t know what to believe, so it’s like there is nothing.”

This is what I’m hearing from lots of folks: Ukraine is complicated, there are all these names to remember, and some scandal-weary people are just throwing up their hands.

The fact that the public is awash in conflicting media accounts—what I described last week as parallel universes—isn’t helping. If the hearings are simultaneously being described as damaging to the president and a phony witch hunt, many readers and viewers will conclude that it’s just more endlessly partisan media warfare.