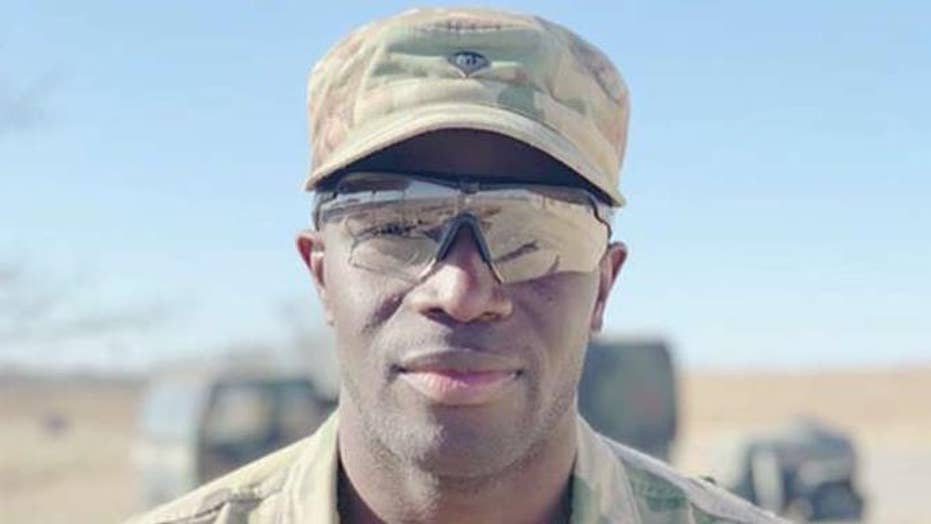 Former Arizona Cardinals defensive back Jimmy Legree said Saturday that his dream was always to serve his country as a soldier.

Legree, appearing on "Fox & Friends," said he envisioned a career in the military from the time he was a child transfixed by war movies.

"I always wanted to be a part of that military family," he said.

Legree, 28, started basic training at Fort Sill in Oklahoma in December after enlisting in the Army as a communications specialist. So far, he said, his transition from pro athlete to soldier has been a "good journey."

"I'm excited to be here," Legree said. "And excited to see what my future is going to be in the military lifestyle."

Jimmy Legree, 28, began basic training at Fort Sill in Oklahoma back in December after enlisting in the Army to pursue a career as a communications specialist - something he says was a childhood goal. (U.S. Army)

Legree, a 2013 graduate of the University of South Carolina, said he hopes to bring dedication, a strong work ethic, resilience and focus to his budding military career.

He told "Fox & Friends" hosts Dean Cain and Pete Hegseth that he joined the Army to fight for his country.

"I always wanted that," he said.

Legree was with the Cardinals in 2014 and 2015, when he made preseason appearances. He was previously signed by the Seattle Seahawks for a short time in 2014.

While some of his fellow soldiers rib him about his time in the NFL, jokingly asking for autographs, for the most part he's just one of them.

"I'm not special or anything like that," Legree said.

He is currently assigned to D Battery, 1st Battalion, 19th Field Artillery. He graduates from basic training on Feb. 21 and will then head to Fort Gordon in Georgia to learn more adanced skills.