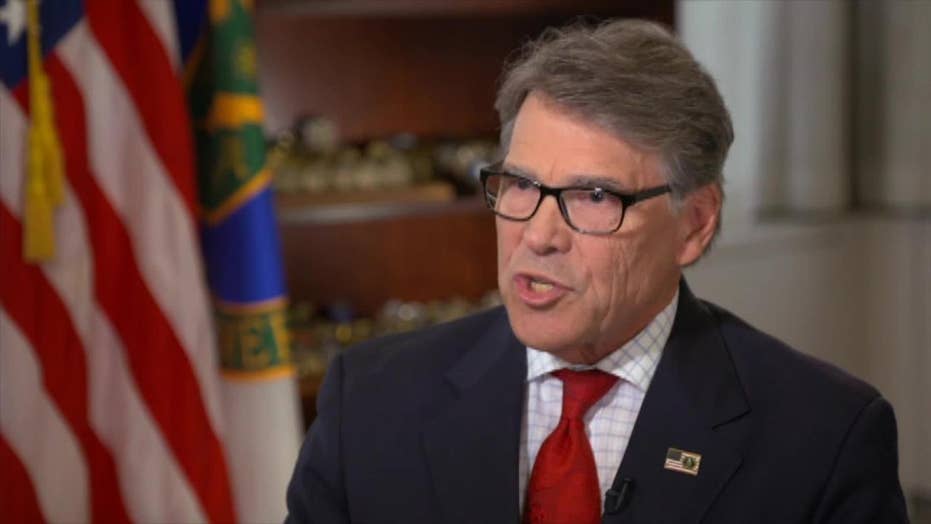 Rick Perry on the Ukraine call: Not once was the name Burisma or the Bidens mentioned to me

Energy Secretary Rick Perry has denied any knowledge of President Trump's desire for Ukraine to launch investigations into Joe Biden, his son Hunter and Hunter's activities while on the board of natural gas company Burisma Holdings.

“Not once, not once was the name Burisma [or] the Bidens mentioned to me," Perry, the former governor of Texas, told Ed Henry in an exclusive interview that will air on "America's News HQ" this weekend. "Not by the president, not by Rudy Giuliani and not by [U.S. Ambassador to the European Union] Gordon Sondland. And if there's anyone who says anything different, then they're surmising. And that's not a wise thing to do."

Published reports have described Perry, Sondland and former special envoy to Ukraine Kurt Volker as one of "three amigos" trying to set policy outside the official track. During his testimony Wednesday, Sondland produced emails and texts showing the three kept Secretary of State Mike Pompeo and others apprised of their activities.

ADAM SCHIFF CLOSES PUBLIC HEARING WITH ANIMATED SPEECH: ‘THIS PRESIDENT BELIEVES HE IS ABOVE THE LAW’

Trump has come under fire from House Democrats over his July 25 call with Zelensky, in which he urged Zelensky to investigate Hunter Biden's dealings in the country. House Democrats said the president withheld $400 million in military aid as a condition of Ukraine launching the investigation. Trump and the White House repeatedly have denied he did anything wrong.

House Intelligence Committee Chairman Adam Schiff, D-Calif., closed the fifth day of public impeachment inquiry hearings with a fiery speech, saying among other things that President Trump considers himself "above the law” and “beyond accountability.”

“In my view, there is nothing more dangerous than an unethical president who believes they are above the law,” Schiff said, adding “We are better than that,” before dramatically banging his gavel to adjourn the hearing.

Perry predicted that Trump "will muscle right on through this. He is an extraordinary individual to stay focused and disciplined from the standpoint of, you know, we got a mission here and we're going to get through it and we're going to make this happen.

“I don't see the American people buying into this thing," Perry added. When asked if the Senate would vote to remove Trump from office if he is impeached, Perry said: "Oh, Lord, no. Not a chance."