Andy Puzder: Elizabeth Warren is more Native American than she is a capitalist

Puzder was responding to Warren's letter to J.P. Morgan CEO Jamie Dimon, urging him and other financial leaders to support her 2020 campaign agenda.

"I expect that you will endorse and wholeheartedly support the reforms laid out in the Accountable Capitalism Act," she wrote. 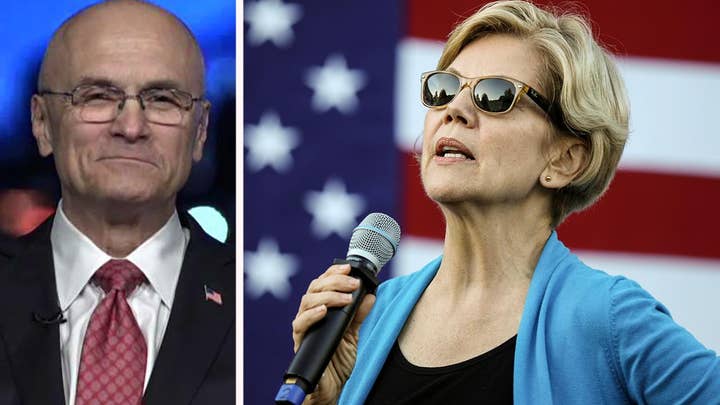 "I don't know what view [Warren] has of capitalism," Puzder said. "She claims she's a capitalist to the core -- I think she's more Native American than she is capitalist. I mean, this letter is ridiculous. She writes it like she's the premier of China, ordering corporations in China to do X or to do Y."

Puzder claimed Warren's platform attacks the very foundation of business and free enterprise that drives wealth in the United States and said everyday Americans will see their 401(k)'s take a hit if she assumes office.

"She attacks corporate profits, which is how businesses stay in business -- it's how they make money [so] that they can pay dividends," he said. "She then attacks dividends which is how corporations get money out, not only to individuals or corporate executives... but also to 401(k) plans and pension plans.

"If pension plans -- if their dividends are cut, they're not going to be able to meet their obligations to retirees," Puzder continued. "The entire letter she wrote to Jamie Dimon was an embarrassment. I hope people actually read it."

Puzder also said Warren's policies would ironically widen the wealth gap and stifle economic growth, all in the name of redistribution of wealth.

"People's wages are up, there are more people working than have ever worked in the history of this country. They're making more money. They're taking home more money because of the tax cuts, and income inequality is shrinking. So what she wants to do would hurt the economy, it would hurt workers, it would increase income inequality. It would do all of the things that she says she's opposed to."