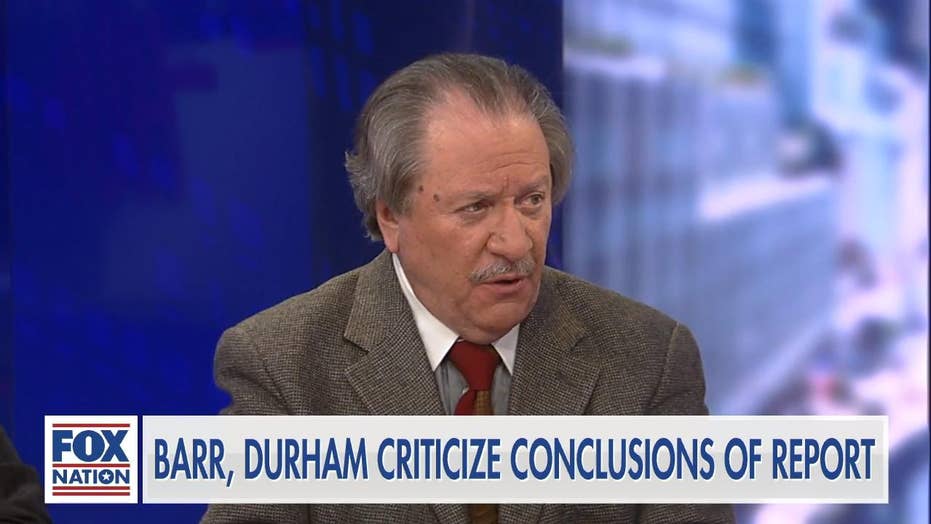 Comey is 'delusional' if he thinks Horowitz FISA report vindicates him: Lawyer

“I think the problem with Mr. Comey is he is delusional," diGenova said Tuesday on Fox Nation's "Witch Hunt."

Comey claimed an apparent victory over the FBI's handling of the Trump-Russia probe in 2016, saying criticism of the probe “was all lies” after Justice Department Inspector General (IG) Michael Horowitz said investigators found no intentional misconduct or political bias surrounding efforts to launch the 2016 investigation.

Comey, however, seemingly ignored the portion of Monday's report where Horowitz faulted the bureau's handling of surveillance warrants during his time as director.

“So it was all lies,” Comey tweeted, in an apparent reference to President Trump’s claims that the FBI wrongly investigated the president's alleged ties to Russia. “No treason. No spying on the campaign. No tapping Trump's wires. It was just good people trying to protect America.”

Former FBI Director James Comey on Tuesday said “history has its eyes on us” and encouraged people to vote for Democrats in the upcoming midterm elections. (AP)

Fox News Legal Analyst Gregg Jarrett, host of the Fox Nation show, broke down the "many stunning takeaways" from the report, and he asked diGenova to weigh in on Comey's claim.

"He has talked himself into believing -- and he's a very, very good actor -- he tries to be convincing but in fact...[he had a] disgraceful downfall," diGenova said. "He basically destroyed the integrity of the FBI not only with the Hillary Clinton investigation with the server, but he basically decided he was going to destroy an American presidential candidate and then a president -- and he almost succeeded."

"If Hillary would have won, we never would have known about any of this," he added. "Trump has saved the country by winning."

“I think the problem with Mr. Comey is he is delusional."

"It's very clear that he's been at the very heart of this, and I think more and more is going to be coming out," he said. "Even the Horowitz report mentions the failure of leadership from the top down."

U.S. Attorney John Durham, who conducted a separate investigation into the origins of the 2016 probe, said he disagreed with Horowitz's findings on the matter and believes more evidence will surface that could potentially point to Comey's mishandling in the opening of the investigation.

“Based on the evidence collected to date, and while our investigation is ongoing, last month we advised the inspector general that we do not agree with some of the report’s conclusions as to predication and how the FBI case was opened,” Durham said in a statement.

Acting FBI Director Christopher Wray appeared to come to Comey's defense in an ABC interview, where he highlighted the IG report's conclusion that there was no political bias or improper motive behind the FBI's launching of the Russia probe, saying: "I think it's important that the inspector general found that in this particular instance, the investigation was opened with appropriate predication and authorization."

When asked if he had any evidence that the FBI unfairly targeted Trump's campaign, Wray said, "I don't," and appeared to take offense at the notion that the FBI is part of a "deep state."

Many, including President Trump, responded to Wray's remarks, and diGenova echoed his frustration.

“Over the last 24 hours, one of the most disturbing events is Christopher Wray’s public statement [on] the current FBI director in which he basically is flipping pancakes. I mean the guy has no sense what an egregious offense this is to [the] FBI,” diGenova added.

To hear diGenova's full remarks and for extended commentary from additional guests of the show, visit Fox Nation and watch the latest episode of "Witch Hunt" today.