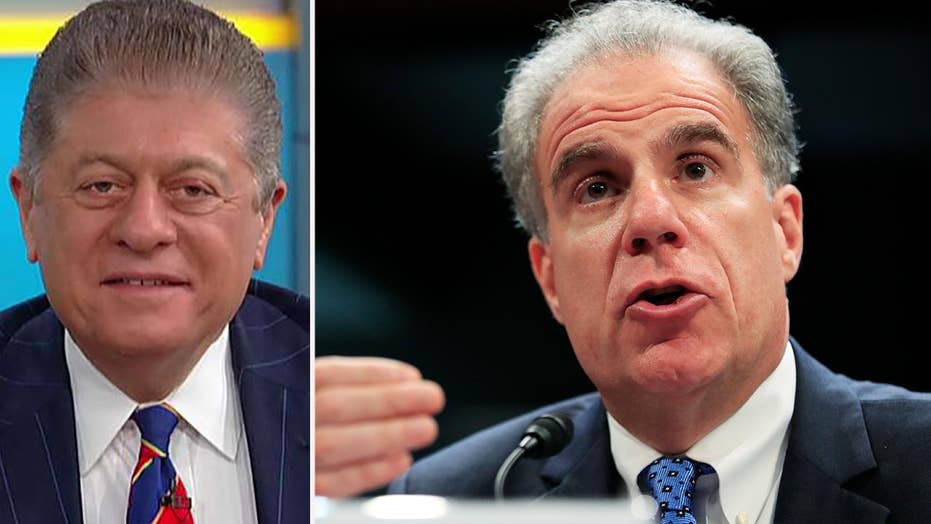 Judge Napolitano: FISA has been publicly scrutinized for the first time in history

After the release of the DOJ inspector general report, Judge Andrew Napolitano says the real problem is with FISA's secrecy and standards that conflict with the Constitution.

The IG report found that while there were a significant number of concerns regarding the FBI's practices in obtaining the FISA warrant and other aspects of the probe, there was no evidence of political bias or impropriety regarding their motives in the investigation. Wray has accepted these findings, but Trump signaled Tuesday he doesn't think Wray is taking the concerns seriously enough.

"I don’t know what report current Director of the FBI Christopher Wray was reading, but it sure wasn’t the one given to me. With that kind of attitude, he will never be able to fix the FBI, which is badly broken despite having some of the greatest men & women working there!" he tweeted.

In an ABC interview, Wray highlighted the IG report's conclusion that there was no political bias or improper motive behind the FBI's launching of the Russia probe, stating, "I think it's important that the inspector general found that in this particular instance the investigation was opened with appropriate predication and authorization."

When asked if he had any evidence that the FBI unfairly targeted Trump's campaign, Wray said, "I don't," and appeared to take offense to the notion that the FBI is part of a "deep state."

"I think that's the kind of label that is a disservice to the 37,000 men and women who work at the FBI who I think tackle their jobs with professionalism, with rigor, with objectivity, with courage ... so that's not a term I would ever use to describe our workforce and I think it's an affront to them,” he said.

At the same time, Wray acknowledged the bureau errors cited in the IG report.

In an interview with The Associated Press, Wray said the report identified problems that are "unacceptable and unrepresentative of who we are as an institution." He said the FBI would make changes to how it handles confidential informants, how it applies for warrants from the secretive Foreign Intelligence Surveillance Court, how it conducts briefings on foreign influence for presidential nominees and how it structures sensitive investigations like the 2016 Russia probe. He said he has also reinstated ethics training.

"I am very committed to the FBI being agile in its tackling of foreign threats," Wray said. "But I believe you can be agile and still scrupulously follow our rules, policies and processes."

This followed a letter to Inspector General Michael Horowitz, in which Wray said, "the FBI accepts the Report’s findings and embraces the need for thoughtful, meaningful remedial action."

While the IG report went into great detail regarding the FBI's failures during the Russia probe, the conclusion that there was no political bias runs contrary to Trump's theory that Obama administration officials were unfairly targeting his campaign.

Attorney General Bill Barr, meanwhile, issued a lengthy statement in which he heavily criticized the FBI's conduct during the investigation, but made a point to note that "most of the misconduct identified by the Inspector General was committed in 2016 and 2017 by a small group of now-former FBI officials."

Barr specifically praised Wray for his cooperation with the IG investigation, and said he has "full confidence in Director Wray and his team at the FBI, as well as the thousands of dedicated line agents who work tirelessly to protect our country."