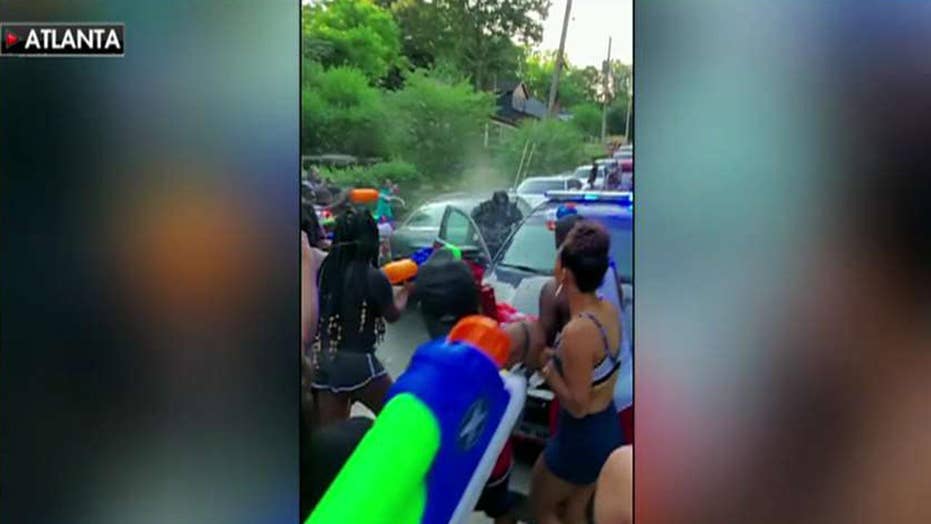 Growing outrage over what's being called a total lack of respect towards law enforcement; reaction and analysis on 'The Five.'

"This guy's a chump. He sits there on his throne, on his a--. He doesn't do anything," Bongino said, trying to hold back his emotions. "He craps on the cops at every single opportunity. He blames them and... he tells his kids they need special rules dealing with the police officers, which is bull... You get the rest of it.

"This is your fault, de Blasio," Bongino added. "You have never backed up the cops."

New York City police said Friday that they had arrested a fourth person in connection with a string of water dousing incidents against uniformed officers across the city earlier in the week. On Wednesday, officers arrested a gang member seen on video dumping a bucket of water over a uniformed officer in Brooklyn.

Video has also surfaced of a similar soaking incident in Atlanta

Bongino, a former NYPD officer, discussed a fellow officer who died in the line of duty and spoke about his time working in the city during the mayoralty of Rudolph Giuliani.

"We had a general idea back then that even though we knew we were going to have casualties ... we were always going to have each other's back," Bongino said. "There was this top-down mentality in the Giuliani era, it's not an 'us versus them,' we work for the community but we are not going to be crapped on either. That is gone."

Bongino once again blasted De Blasio for what he described as the mayor's lack of support for the NYPD.

"De Blasio is a coward," Bongino said. "There are empty seats at Thanksgiving every year because we lose cops. Kids have lost their fathers and you never back them up. It's this guy's fault."