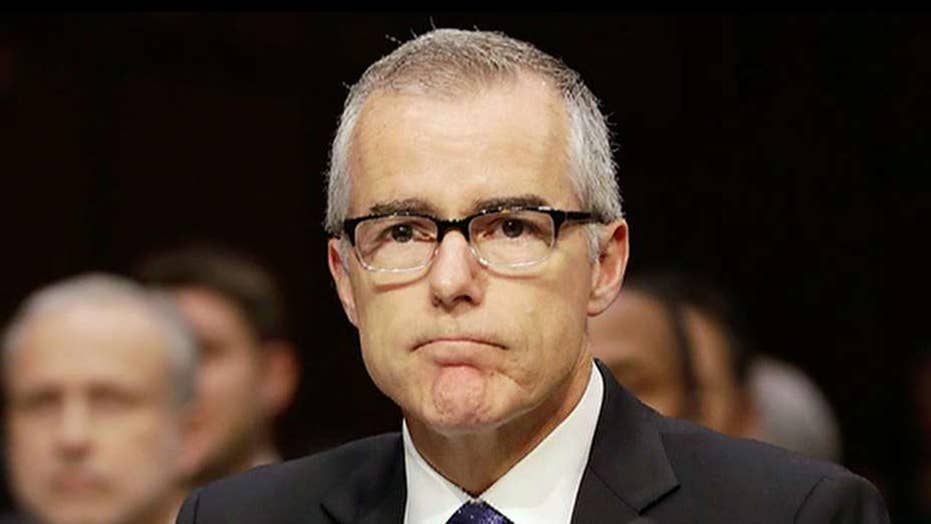 McCabe suing to get benefits and pension back; Kristin Fisher reports.

CNN announced Friday it hired controversial ex-FBI Deputy Director Andrew McCabe as a contributor, and critics quickly slammed the decision as a “disservice” to viewers.

McCabe was famously fired by the FBI on March 16, 2018, after a Justice Department inspector general report found he had repeatedly misstated his involvement in a leak to The Wall Street Journal regarding an FBI investigation into the Clinton Foundation. The watchdog office referred the matter to the U.S. Attorney's Office in Washington, which has been investigating.

McCabe is suing the Justice Department and the FBI over his dismissal from the bureau, claiming that the agencies bowed to political pressure from President Trump.

Now it seems McCabe will have a platform on the ratings-challenged cable network as the lawsuit moves forward. The Hill media reporter Joe Concha told Fox News that “McCabe was fired by the FBI for lying at least four times, including three times under oath” and lacks the trustworthiness needed to be taken seriously as a cable news pundit.

“His credibility is non-existent," Concha said. "He told Anderson Cooper earlier this year he believed it was possible President Donald Trump is a Russian asset, an outrageous claim for someone of his former stature to make on national television just to promote a book."

“If applying the Michael Flynn jail sentence [standard] regarding lying to the FBI, McCabe shouldn't be going to CNN, he should be going to jail,” Concha added. “This is truly a disservice to CNN viewers, which will only further plunge the network's credibility into a black hole.”

Conservative strategist Chris Barron mocked CNN for “ranting” about former Trump administration staffers landing media jobs and then hiring McCabe “who was fired for lying” himself.

“Honestly, you can’t make this stuff up," Barron told Fox News. "At this point, CNN would be willing to hire Baghdad Bob if he promised to criticize Trump. It’s sad to see the once-respected outlet reduced to this."

The hiring of McCabe has some opposition within CNN.

“There was a time when journalists were inherently skeptical of intelligence officials," a CNN insider told Fox News. "Now, former spy chiefs and FBI officials find paid gigs with flattering, non-challenging appearances on our network. Such arrangements would’ve been unimaginable to journalists in decades past."

McCabe’s suit accuses President Trump of scheming to "discredit and remove DOJ and FBI employees who were deemed to be his partisan opponents because they were not politically loyal to him" and claims former Attorney General Jeff Sessions and current FBI Director Christopher Wray created a pretext to force him out in accordance with the president's wishes.

The federal complaint also contends the FBI and Justice Department strayed from established policies, with Wray refusing to tell McCabe why he was being fired and a senior Justice Department lawyer telling McCabe's lawyer that they were "making it up as we go along."

CNN did not immediately respond to a request for comment

The news that McCabe found a new gig was broken by CNN’s in-house media reporter Oliver Darcy, and his tweet was quickly met with criticism and swiftly ratioed.