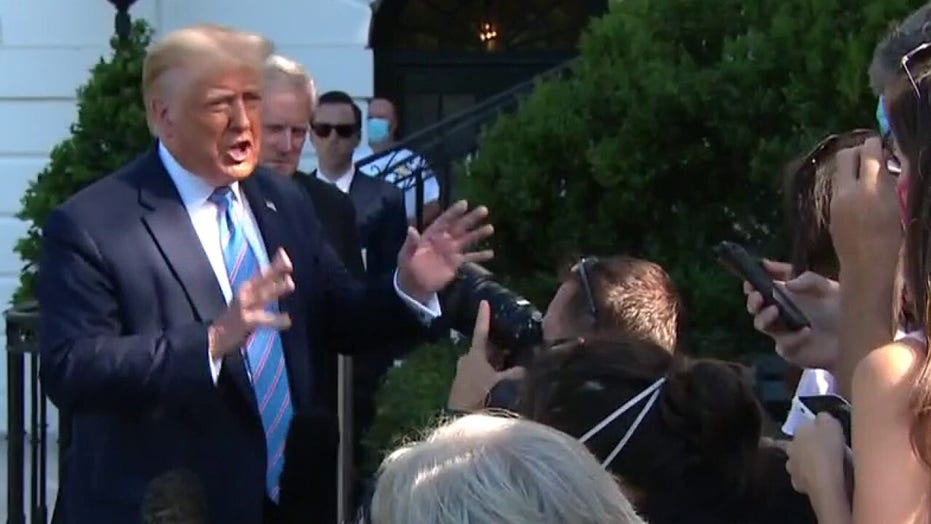 President Trump accuses CNN of targeting conservative voices after he was questioned about retweeting a doctor's claim that hydroxychloroquine cures COVID-19.

CNN has received brutal mockery on Twitter after tweeting a story on Thursday about recommended cervical cancer screenings for "individuals with a cervix," rather than "women."

The outlet's phrasing was similar to that of the American Cancer Society, which issued a guideline urging "people with a cervix" to start screenings at 25 years of age.

CNN's story on the guideline touched on an already-raging debate surrounding the biological basis for gender. Earlier this month, Pink News touted a U.K. cancer charity that pushed back on what the outlet described as the "disgustingly transphobic lie" that only females get cervical cancer.

CNN UPDATES REPORT TO REMOVE 'FETUS THAT WAS BORN' PHRASING

One of the CNN story's paragraphs suggested that pap tests and hysterectomies knew no gender.

"Individuals who are 65 and older and have had an adequate negative result in prior screening can stop getting screened," the article read. "Those with a hysterectomy can also discontinue screening after two consecutive negative HPV tests, two negative co-tests, or three negative Pap tests done within the past 10 years -- with the most recent having occurred in the past three to five years."

Many Twitter users pointed out that the outlet was ignoring a funamental reality of human biology.

"Biology must be hard for @CNN," Students for Life of America President Kristan Hawkins tweeted. In another tweet, she asked: "You mean women? Only women can have a cervix."

"Women. They are women. And, @CNN , just because you self-identify as a news channel doesn’t make you one," UK politician Peter Whittle tweeted. Fox News contributor Mollie Hemingway took aim at CNN's "Facts First" campaign, which uses fruit to make its point.

ACLU CLAIMS 'MEN WHO GET PREGNANT AND GIVE BIRTH ARE MEN'

"How do I find out if I have a cervix?" tweeted Stephen Pollard of The Jewish Chronicle. "Do I need a scan? Or is there some sort of general concept that identified individuals with a cervix?"

Others piled on by toying with song lyrics mentioning women. "You're once, twice, three times an individual with a cervix," one user tweeted.

However, some defended the outlet, suggesting that the phrasing was appropriate.

On Friday, CNN's head of strategic communications defended his outlet. He suggested that critics took issue with the outlet's attempt at "inclusivity."

"Imagine feeling so threatened by inclusivity that you’re compelled to write a story bashing another organization for practicing it," CNN's Matt Dornic tweeted. Some -- including those dubbed Trans Exclusionary Radical Feminists or TERFs -- have complained that ideas like the one pushed by CNN erase or denigrate womanhood.

In June, author J.K. Rowling wrote: "[A]s many women have said before me, ‘woman’ is not a costume. ‘Woman’ is not an idea in a man’s head. ‘Woman’ is not a pink brain, a liking for Jimmy Choos or any of the other sexist ideas now somehow touted as progressive. Moreover, the ‘inclusive’ language that calls female people ‘menstruators’ and ‘people with vulvas’ strikes many women as dehumanising and demeaning."

This wasn't the first time CNN appeared to shun plain phrasing for political reasons. The outlet previously received criticism for using the phrase "fetus that was born" while discussing protections for infants who survived abortions.