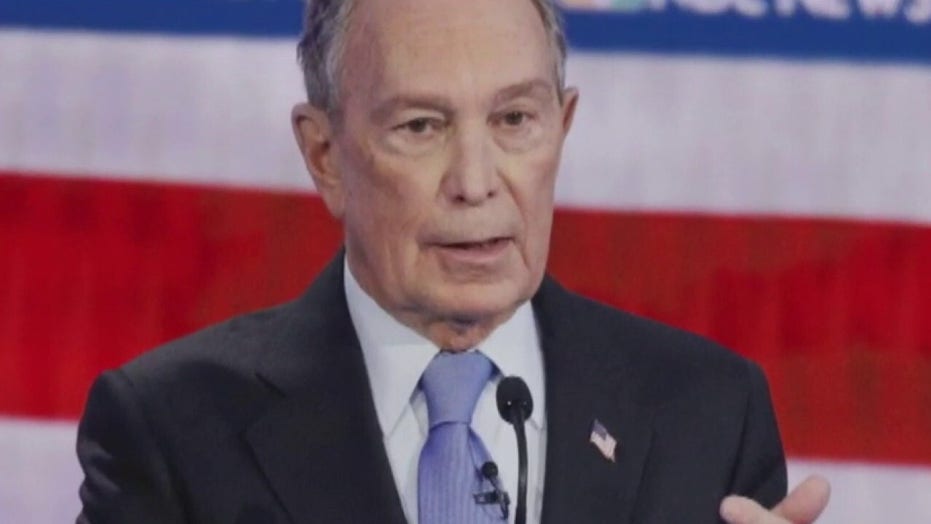 During Wednesday night's Democratic debate, Bloomberg was the target of several attacks, but the moment he touted his own business background had his opponents speechless.

"Maybe you want to talk about businesses. I think I'm the only one here who ever started a business, is that fair?" Bloomberg looked over at his opponents, none of whom responded.

A moment later, Bloomberg quipped, "OK," and carried on with his remarks.

Bloomberg had some fun on Thursday at the expense of his Democratic rivals, sharing a clip of that exchange but overtly embellished the response from the other candidates on the debate stage, showing blank facial expressions from Sens. Elizabeth Warren of Massachusetts, Bernie Sanders from Vermont and Amy Klobuchar from Minnesota, as well as former Vice President Joe Biden and former South Bend Mayor Pete Buttigieg, over a lengthy 20 seconds with the sounds of crickets being heard throughout.

The video sparked outrage among many in the mainstream media and was condemned on-air by CNN and MSNBC.

"He's making another mistake. His campaign making another big one today and that is there's a video that his campaign tweeted this morning, it's gotten a million views -- that didn't happen," CNN chief political correspondent Dana Bash said. "It is a deceptively edited video."

"His campaign is saying, 'C'mon, it was tongue-in-cheek,' but in today's day and age where we are so concerned about things that are doctored, deep fakes on the Internet," Bash said.

MSNBC dedicated multiple segments to the satirical clip in relation to Twitter's latest efforts to crack down on "disinformation." MSNBC anchor Stephanie Ruhle slammed the Bloomberg campaign for sharing what she described as a "doctored" video.

"This isn't just about rightwing conspiracies or something far to the left because just yesterday, Mike Bloomberg's campaign played a doctored video from the debate," Ruhle said.

Ruhle played a portion of the clip, which she claimed afterward to viewers "wasn't true" and that the cricket noises were added for "dramatic effect."

"The campaign has said it was tongue-in-cheek, but when somebody sends you that clip, that looks very good for the mayor and looks really bad for everyone else, and it's not true," Ruhle said.

NBC News reporter Ben Collins also pushed back on the Bloomberg campaign for the video, which is something Collins said Twitter said would "flag" with the rollout of its new attempt to prevent the spread of disinformation.

"There was about a second or two of silence, not 20 seconds of silence or whatever, that's the sort of thing, without the crickets, people might take seriously," Collins told Ruhle. "And that's how disinformation sort of steamrolls and if nobody is going to stop it, it can change narratives. It can change the outcome of the election. We've been there before."

"My boss is standing just offset, so I can't use the word that I want to use for that, but in Canada for short-form, we call it B.S.," Velshi reacted to the video. "Twitter is considering reporting that video, labeling it as 'manipulated,' which it should because it obviously is!"

The Bloomberg campaign defended the "tongue-in-cheek" video, but that didn't stop the candidate from earning four "Pinocchios" from Washington Post fact-checker Glenn Kessler.

"In anticipation of the presidential election season, The Fact Checker last year worked with The Washington Post video department to produce a guide to manipulated video. The goal was to produce a common language to identify and label video that is designed to mislead viewers," Kessler began. "Well, in the wake of a widely panned debate performance, Bloomberg’s campaign produced a doozy."

Kessler's "fact-checking" included identifying when some of the facial reactions made by the other candidates actually occurred in the debate, which according to the Post's own guide is considered "deceptive editing."

"Political ads can be fun and entertaining, but they shouldn’t be misleading. Anyone who had not seen the debate could have been easily misled into thinking the other candidates stood there in stunned silence for nearly half a minute," Kessler continued. "We’re taking a tough line on manipulated campaign videos before viewers are flooded with so many fakes that they have trouble knowing what is true. The Bloomberg campaign should label this as a parody or else take the video down."

PolitiFact similarly condemned the Bloomberg video, but gave it a slightly gentler rating of "Mostly False."

Other journalists took to Twitter to express their disapproval of the satirical ad.

"This is pretty wild: After Mike Bloomberg bombed at the debate last night, his campaign cut a deceptive video to make it look like he did well," Politico reporter Holly Otterbein reacted.

"This was edited to make it look like there was several seconds of silence after Bloomberg asked if any other candidate started a business. Similar to Trump's edited video of Pelosi ripping up the SOTU speech. Facebook and Twitter were fine with the latter," CNBC technology editor Steve Kovach alerted those who couldn't determine if the clip was satirical.

"This edit is a lie," BuzzFeed News politics reporter Dominic Holden exclaimed, "Bloomberg’s video shows he asks if anyone else on stage has started a business and a full 20 seconds pass in silence. in reality, Bloomberg kept talking after a second and the rest let him."

"It's absolutely incredible that news organizations are rushing to condemn them considering the fact that many of these networks (and their allies) have been caught engaging in actual deceptive editing and outright falsehoods over the years," Houck told Fox News. "So The Washington Post can hurl Pinocchios at the Bloomberg campaign like ninja stars, but I don't think any serious person outside the news business will take this seriously."

Tom Elliott, founder and news editor of the media company Grabien, dismissed the networks' supposed efforts to stop the spread of disinformation, telling Fox News it reveals "what little regard they appear to hold for their viewers' intelligence."

"Does anyone think a single one of the video's 3.8 million viewers thought they were watching actual debate footage?" Elliott asked.

Even the Trump-appointed FCC commissioner Brendan Carr spoke out in defense of Bloomberg.

"Political satire is one of the oldest and most important forms of free speech. It challenges those in power while using humor to draw more people into the discussion. Equating this type of political speech with doctored deepfakes or illegal content is a serious mistake," Carr began a multi-tweet thread on Thursday. "From Internet memes to late-night comedians, from cartoons to the plays and poems as old as organized government itself - Political Satire circumvents traditional gatekeepers & helps hold those in power accountable. Not surprising that it’s long been targeted for censorship."

He continued, "Shutting down this type of political speech - especially at the urging of those targeted or threatened by its message - would represent a serious threat to our freedoms and ability to hold those in power accountable.

The Hill media reporter Joe Concha recalled how the media "celebrated" Jon Stewart, the former host of Comedy Central's "The Daily Show," whose gift of making deceptively edited videos was a trademark.

"Not saying we should condone any misleading edits, but let's stop pretending Washington politics was a pure and honest and noble place before Donald Trump came along," Concha told Fox News.