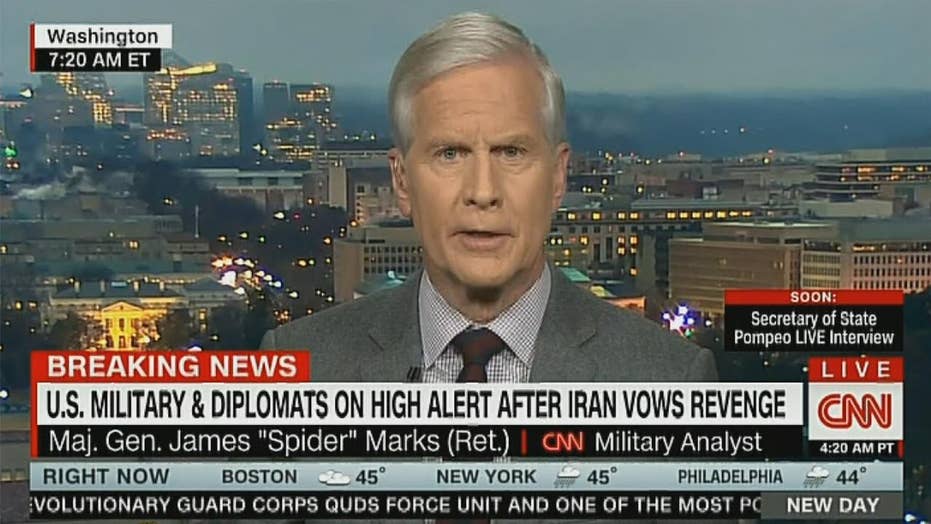 Major Gen. James A. "Spider" Marks [Ret.], who serves as a military analyst for CNN, pushed back against Sen. Chris Murphy, D-Conn., who tweeted late Thursday that the strike did not have authorization from Congress and could set off a "potentially massive regional war."

Murphy, a member of the Senate Foreign Relations Committee, also tweeted that no one knows what will happen next when it comes to potential Iranian retaliation and that the administration acted "with no consideration of the consequences."

Marks (Ret.) scolded Murphy for his rush to criticize Trump's decision, pointing out that Soleimani was "brazenly" traveling around Baghdad Thursday just after attacks - blamed on Iran-backed militias - that killed an American contractor and threatened personnel at the U.S. embassy.

“What I would say to Senator Murphy is, why don’t you just be quiet,” Marks said, questioning the notion that the strike has made the world "more dangerous."

"Look, when has Iran ever demonstrated self-restraint? I mean, that’s the question I have. So, is the world more dangerous today? Maybe it’s more dangerous, but when has it not been dangerous? When have we not been a target of a regime like exists in Tehran? I mean, it happens as a matter of routine," said Marks.

Marks said it was “amazingly brazen" that Soleimani felt comfortable enough to go to Baghdad just after the attack on the American embassy.

“This opportunity presented itself and I’m certain what happened was the president made the determination ‘let’s pull the trigger now,'” Marks said, calling it "naive" for Soleimani to think he could move around Iraq in the open after the past week of Iran-backed aggression.

“And I would say it’s not causally linked to what occurred at the U.S. Embassy a few days before, other than he happened to be there checking up on what was taking place.”

President of Iran Hassan Rouhani promised to "take revenge for this heinous crime." Rouhani also said Iran would "raise the flag" of Soleimani, the head of the Islamic Revolutionary Guard Corps' elite Quds Force, "in defense of the country's territorial integrity and the fight against terrorism and extremism in the region."

The Pentagon confirmed Thursday evening that Trump had ordered the attack that killed Soleimani and other military officials at Baghdad International Airport. Iran’s top “shadow commander” was responsible for the deaths of hundreds of American and coalition service members and the wounding of thousands more, the State Department said.