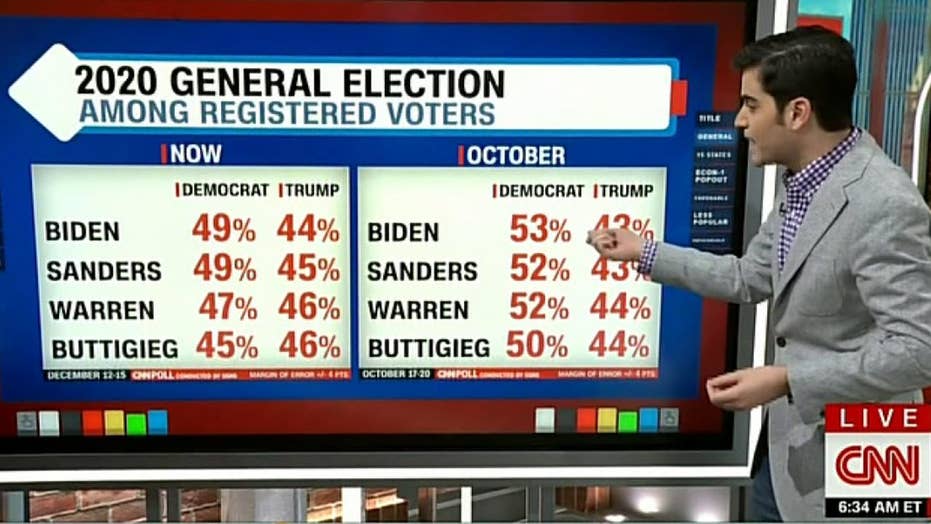 President Trump has made substantial gains in 2020 matchups with Democratic candidates, according to new polling from one of his least favorite outlets.

"This is massive movement towards the president of the United States, at least in our poll at this particular point," CNN political analyst Harry Enten said on Friday.

While appearing on "New Day," Enten detailed the differences between support for Democrats in October versus support shown in their December polling.

The numbers showed former Vice President Joe Biden with just a five-point lead over Trump, compared to the 10-point lead he had in October. Sen. Bernie Sanders, I-Vt., similarly saw his lead over Trump narrow by five points.

In October, Sen. Elizabeth Warren, D-Mass., led Trump 52 percent to 44 percent but by December, she led him with just 47 percent over 46 percent of registered voters. Mayor Pete Buttigieg flipped from beating Trump with 50 percent of the vote to losing by one percentage point.

"And Warren was up eight and now she’s only up one. And Buttigieg was up six, and now he is down one."

The polling came after a tumultuous two months of campaigning and House Democrats pushing impeachment. According to CNN, it conducted its polling on Wednesday just before the House approved two articles of impeachment -- something voters began souring on in recent polling.

CNN also revealed that under Trump, the economy received its highest rating in nearly two decades. Enten speculated that the economic approval drove higher favorability ratings for the president. Several of the top Democratic candidates saw their favorability rating flip from net positives to net negatives between October and December.

"I think you have this combination of Trump becoming a little bit more popular and the Democrats becoming a little less popular, and that's why the numbers are moving in his direction," Enten said, noting that 76 percent of respondents rate the current economic conditions as "good," while 22 percent rate the situation as "poor."

"That is, in fact, the best numbers we've had of not just this past decade, but the last decade," he said.

It's unclear what was behind Warren's and Buttigieg's declines but Warren has faced intense scrutiny in recent months surrounding how she'll pay for "Medicare-for-all." Fox News reported in November that Warren's plan would cost $52 trillion, but she maintains that costs won't increase for the middle class.