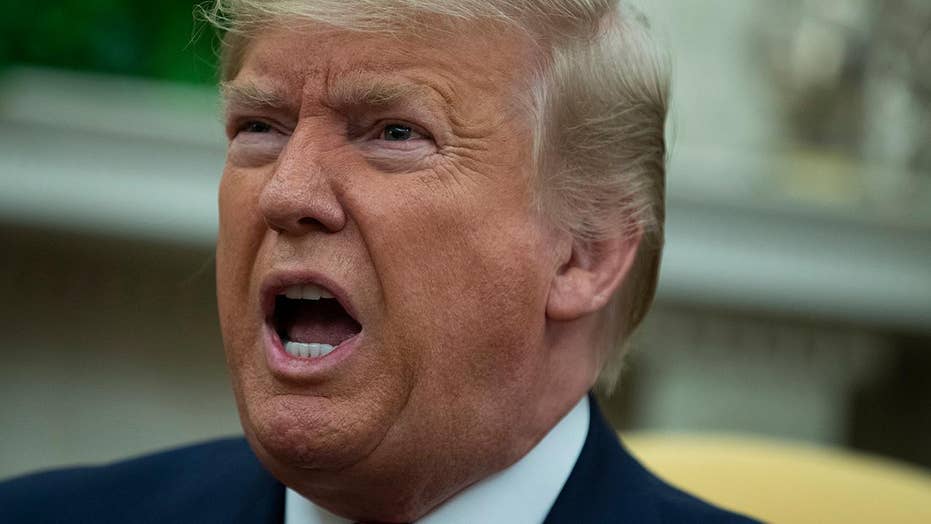 Trump trashes Democrats and impeachment process: It’s a mark on our country

A new poll released hours before the Democratic-controlled House of Representatives was poised to impeach President Trump indicates that by a slight 51-45 percent majority, Americans oppose removing the president from office.

The survey – released Wednesday morning by Gallup – also points to a drop in support for impeachment from October, when the inquiry into Trump got underway. At that time, according to Gallup, Americans supported impeachment by a 52-46 margin. And the poll, which was conducted Dec. 2-15, indicates that the Republican incumbent’s approval rating has edged up the past two months – from 39 percent in October to 45 percent now – as the House held blockbuster public hearings.

The Gallup survey is one of seven live telephone operator national polls on impeachment that were conducted this month and released starting on Sunday. Some of the surveys indicate a slight deterioration in support for impeachment since October, with the others showing that support and opposition have remained mostly static.

The president, though, has played up the polls heavily, tweeting Friday that “Poll numbers have gone through the roof in favor of No Impeachment.”

While all the surveys indicate a deep partisan divide between Democrats and Republicans over impeachment, most of the polls suggest that a majority of independent voters oppose booting Trump from the White House.

Surveys from Quinnipiac University, Gallup, PBS/NPR/Marist, and USA Today/Suffolk University all point to a majority of independents opposed to impeaching and removing the president from office. Polls from Fox News and CNN indicate that independents are evenly divided.

And the polls also spotlight a gender divide – with majorities of men opposing and women supporting – on impeaching and removing Trump from the White House.

The surveys also show an uptick in the president’s approval rating from October to December.

The president faces two articles of impeachment – that he abused the powers of his office and that he obstructed Congress as it investigated him. Impeachment by the Democratic majority in the House would trigger a Senate trial, which would likely be held in January. The GOP-controlled Senate is expected to acquit Trump.

The president’s facing impeachment over his July 25 call with Ukrainian President Volodymyr Zelensky in which he urged Zelensky to investigate former Vice President Joe Biden and his son Hunter over their dealings in the eastern European country. Biden is one of the top Democratic 2020 presidential contenders hoping to challenge Trump in next year’s election. Fueled by whistleblower complaints, a transcript of the call released by the White House, and testimony by witnesses in the inquiry, Democrats say that the president was asking a foreign country to potentially interfere in a U.S. election.

Adding to the controversy was the fact that before that phone call, millions in U.S. military aid to Ukraine was put on hold. Despite allegations that the president was using that money as leverage, Trump has repeatedly insisted that he did nothing wrong. He’s said there was no "quid pro quo" and has on numerous occasions described his conversation with the Ukrainian leader as “perfect.”

On Monday morning, the president took to Twitter to call the Democrats’ impeachment push the "greatest con job in the history of American politics!"