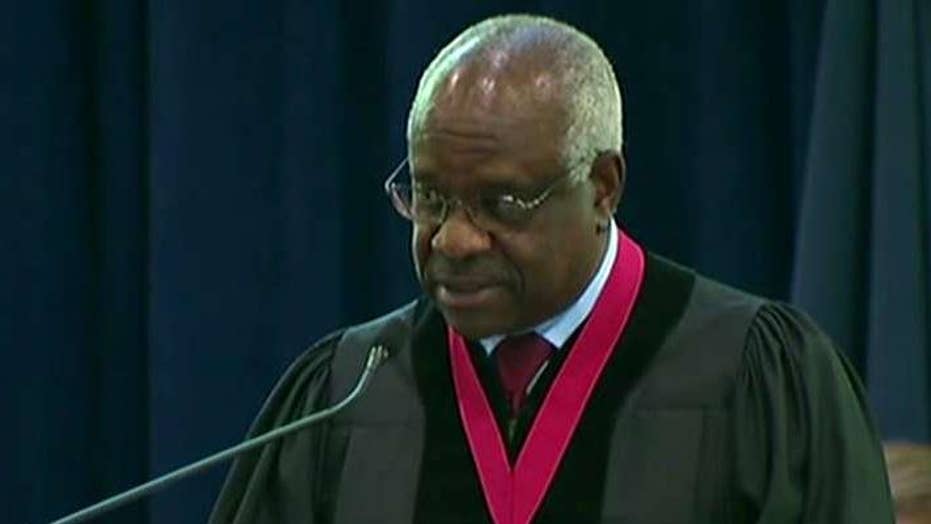 A new documentary shows Supreme Court Justice Clarence Thomas opening up about his confirmation process, criticizing the way people used his race against him and sharing his thoughts about former Vice President Joe Biden.

"I understood what he was trying to do. I didn't really appreciate it," Thomas said of Biden, the former chair of the Senate Judiciary Committee. Biden, who oversaw Thomas' confirmation hearings in 1991, had tried to ask Thomas about "natural law" -- a thinly veiled attempt to get at his views on abortion, according to the justice.

"Natural law was nothing more than a way of tricking me into talking about abortion," Thomas said, according to ABC News.

His comments came as part of the documentary "Created Equal: Clarence Thomas in His Own Words." The film is set to be released in early 2020, nearly 30 years after he assumed his spot on the nation's highest court.

Manifold Prodcutions described it as a way to "tell the Clarence Thomas story truly and fully, without cover-ups or distortions." It reportedly offers Thomas' reflections on what was perhaps the most contentious Supreme Court confirmation process before Brett Kavanaugh's.

In the film, Thomas was apparently put off by Biden's questioning. According to Time, he indicated the 2020 frontrunner had "no idea" what he was talking about.

"One of the things you do in hearings is you have to sit there and look attentively at people you know have no idea what they’re talking about,” he said, referring to Biden's questioning.

He also addressed professor Anita Hill's accusations of sexual misconduct. "Do I have like stupid written on the back of my shirt? I mean come on. We know what this is all about," he said.

"People should just tell the truth: 'This is the wrong black guy; he has to be destroyed.' Just say it. Then now we're at least honest with each other."

He added that the goal of his opposition was to "get rid" of him and then "undermine" him.

Thomas, the second African American to serve on the court, also spoke about the treatment he and Housing and Urban Development Secretary Ben Carson experienced as black conservatives.

"There's different sets of rules for different people," he said in a clip released in October. "If you criticize a black person who's more liberal, you're a racist whereas if you can do whatever to me -- or now, Ben Carson -- and that's fine because you're not really black because you're not doing what we expect black people to do."

Thomas famously described his confirmation process as a "high-tech lynching," telling the Judiciary Committee they were participating in a "circus."

"As a black American, as far as I'm concerned, it is a high-tech lynching for uppity blacks who in any way deign to think for themselves ... and it is a message that unless you kowtow to an old order, this is what will happen to you -- you will be lynched, destroyed, caricatured by a committee of the U.S. Senate rather than hung from a tree," he said.