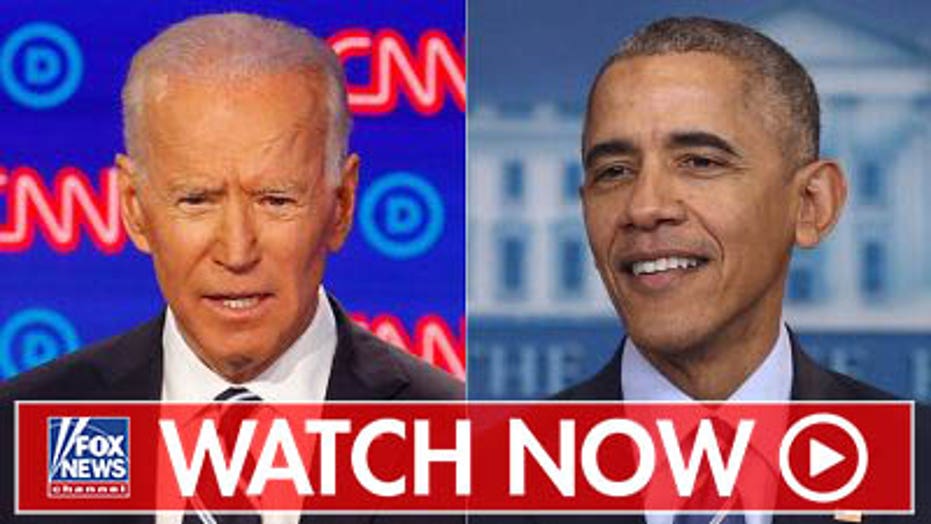 Charlie Hurt on what Obama probably thinks of Biden's gaffes

Charlie Hurt on what Obama probably thinks of Biden's gaffes

Former Vice President Joe Biden's gaffes during his Democratic presidential campaign must be frustrating for former President Barack Obama, according to Charlie Hurt.

In addition, Hurt said, a published report that Obama advised Biden in early 2019 that he did not have to seek the presidency in 2020 is not a positive development for Biden.

"This has been his shtick for 45 years in Washington," Hurt said Friday on "Hannity," referring to Biden's gaffes. "That's why he's never managed to get the nomination for president. It's why the closest he's ever come to the White House was being handpicked by Barack Obama to be his vice president."

The Fox News contributor added that Biden has not been a great ambassador for the Obama presidency.

"Think about this for a minute: Think about how embarrassed Barack Obama must be to have this guy trying to go out there and uphold Obama's legacy," he said. "It's got to be hugely embarrassing."

Regarding the New York Times report about Obama's assessment of Biden's presidential aspirations, Hurt considered whether someone in the ex-president's orbit spoke with the paper.

"Who leaked this stuff?" he asked. "The only people that could have leaked all this stuff to the New York Times was Barack Obama's people. And, I mean -- what a shiv in the back."

Guest host Gregg Jarrett added Biden has been attacked in primary debates for his connection to some of Obama's policies.

In the Times story, Obama reportedly told Biden, "You don't have to do this Joe, you really don't."

Obama reportedly "took pains to cast his doubts about the campaign in personal terms."

Speculation has swirled over the decision by Obama to so far refrain from endorsing Biden formally. Still, despite Obama's early hesitation, he has taken a much more involved role in Biden's campaign than in the efforts of other candidates, The Times reported.