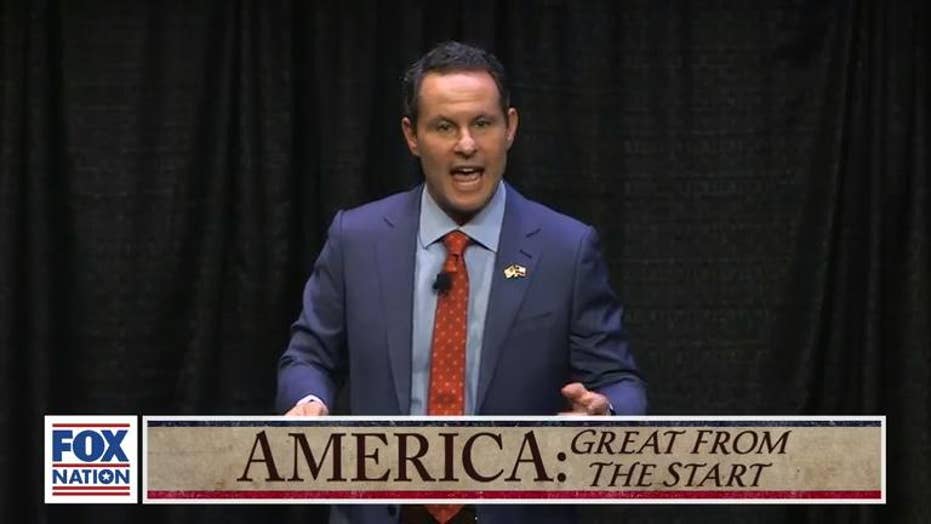 Brian Kilmeade: How I became the man I am today

"I have the best job, I am on the number one network ...I'm privileged — but I think you should understand what a long shot this is and the journey I took, and I think you'll be able to relate to it," said "Fox & Friends" co-host Brian Kilmeade.

Discussing his new book “Sam Houston and The Alamo Avengers” at a live speaking event, Kilmeade opened up to the audience about the journey that led him to become one of America's favorite TV anchors.

"My original goal was to be a great soccer player," he explained, "and the problem with that was ... I wasn't."

"I was determined to be great. I worked and I tried, and with my dad as my coach, I started really making progress," Kilmeade said.

As he worked toward his goal, his family was faced with a sudden tragedy: his father was involved in a fatal accident, leaving Kilmeade to fend for himself, he explained.

"My goal was to double and triple down to prove his belief in me and to show that I could achieve my goals ... in a tribute to him, I was going to go pro," he said.

After his high school coach told him he didn't belong in the sport, Kilmeade went off to college and played soccer at Long Island University while pursuing a degree in communications.

"After my high school coach told me I didn't belong in the game, I'm coming off the bench playing teams that would've beat my high school team by four or five points," Kilmeade reflected.

"I ask you, who was right? The first coach in high school, or the second coach in college?" he asked.

"They're both right. Everybody in life has an opinion of who you can be and who you are ... For whatever reason. Life's not fair — get over it," Kilmeade said.

After a new coach benched the aspiring athlete, Kilmeade understood that soccer was not his calling — but it wasn't an easy decision to make, he explained.

"I think that if you put effort in and you don't get the required results, people think you lose...but you don't. Your glory is delayed  -- it is not denied."

"However, there is something magical about blowing your perfect game...because I'm basically playing with house money, and I promised my second goal, no one's gonna bench me, I'm going to the next team. I will decide when this is over because I already found out what happened when someone else was in control," he said.

His next goal, he said, was "to make it in radio and television."

"I was determined...I was going to blanket the country...and guess what happened. The rejection letters started coming in," Kilmeade recalled.

Reflecting on his journey, Kilmeade said it boils down to "how you digest your setbacks" that propel you toward success later on in life.

"I also think that if you put effort in and you don't get the required results, people think you lose ... but you don't. Your glory is delayed, it is not denied. You decide when it's over, and if you don't get it in your lifetime, the kids you raise, the neighbors who see you ... will be inspired by you and you can revel in their success."

To hear the rest of Kilmeade's story, the challenges he faced getting to the top in his TV career, and his journey to discover some of America's hidden treasures, join Fox Nation and watch "America: Great From the Start" today.