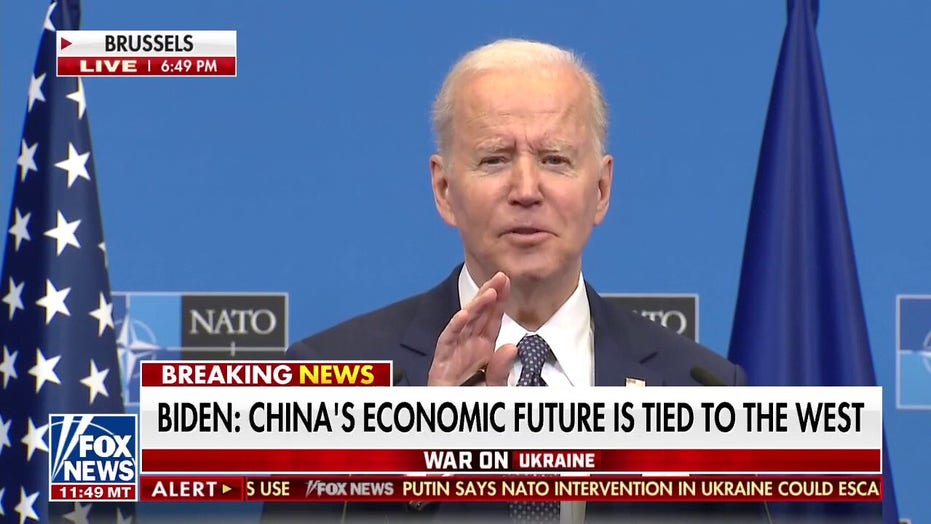 Biden gets testy with reporter on Ukraine: 'You're playing a game with me'

President Biden bristles at reporter's question about effectiveness of sanctions and deterrence on Putin during press conference in Brussels.

President Biden was seen snapping at another reporter during his latest press appearance addressing the U.S. response to the Russia-Ukraine war on Thursday.

Biden traveled to Brussels, Belgium to participate in an emergency NATO meeting to discuss more international efforts to support Ukraine following Russia’s invasion. During a public appearance, Biden announced sanctions on over 400 Russian entities as well as plans to accept more than 100,000 Ukrainian refugees.

However, CBS reporter Christina Ruffini pressed him on whether these actions will be useful in deterring Russian President Vladimir Putin from pressing forward.

Biden’s insistence contrasted with several members of his administration’s previous claims prior to Russia’s invasion. Vice President Kamala Harris stated on Feb. 20 that the purpose of sanctions has "always been and continues to be deterrence." White House Press Secretary Jen Psaki also stated one day later that "deterrence is part of our objective."

Biden further explained to Ruffini, "The mains of sanctions, the increasing the pain, and the demonstration why I asked of this NATO meeting today is to be sure that after a month we will sustain what we’re doing not just next month, the following month, but for the remainder of this entire year. That’s what will stop him."

Ruffini repeated the question, asking whether these actions could make Putin change course.

"That’s not what I said. You’re playing a game with me. The answer’s no," Biden snapped back.

Biden has had a history of yelling or criticizing reporters during press conferences for asking difficult questions. In January, he referred to Fox News reporter Peter Doocy as a "stupid son of a b---h" for asking whether inflation would be a political problem in the midterms. In February, Biden called NBC’s Lester Holt a "wise guy" for bringing up his past claims that inflation would be "transitory."

RICK PERRY: TRUMP HAD PUTIN ‘OVER A BARREL’ WITH OIL AND BIDEN LET HIM UP

Biden instead emphasized that it was more important for NATO to stay united against Putin.

US President Joe Biden departs after delivering remarks about the situation in Afghanistan in the East Room of the White House.  (Photo by BRENDAN SMIALOWSKI/AFP via Getty Images)

"The single most important thing is for us to stay unified, and the world continue to focus on what a brute this guy is and all the innocent lives these people lost and ruined and what’s going on. That’s the important thing," Biden said.

"We have to stay fully, totally, thoroughly united," Biden closed before leaving.