New York Post columnist Karol Markowicz and Moms for Liberty Co-Chair Quisha King on the National School Board Association coordinating with the White House and the Department of Justice before sending emails comparing parent protestors to domestic terrorist.

"The Biden administration has again failed the American people by trying to sweep their assault on parents’ freedom of speech under the rug," Rokita told Fox News Digital Tuesday. "Their refusal to answer these questions from our 14-state coalition shows their blatant disregard for truth and transparency. Millions of taxpaying parents deserve answers from the government they pay for."

The NSBA sent a letter to President Biden in September 2021 that asked for parents protesting at school board meetings to be federally looked into, claiming school officials were facing threats and violence at meetings. Most significantly he NSBA requested in its original letter that parents' actions should be examined under the PATRIOT Act as "domestic terrorists." The PATRIOT Act was signed into law in 2001 by President George Bush after the September 11 terror attacks, to combat terrorism and expanded the boundaries of surveillance.

Additionally, one of the news reports cited in the letter included an incident from a Virginia father named Scott Smith whose child was allegedly sexually assaulted in a school bathroom.

"I am a father who deeply cares for his daughter … I am not a ‘domestic terrorist,'" Smith said. "The NSBA defamed me, impugning my reputation and that of other concerned parents who dared challenge our local school board."

Then, on Oct. 4, Garland issued a memorandum instructing the FBI to collaborate with state and local leaders to address "threats against school administrators, board members, teachers, and staff." He went on to say that this collaboration "will open dedicated lines of communication for threat reporting, assessment, and response." Emails provided to Fox News in November indicated that the NSBA coordinated with the DOJ and White House before sending the letter.

"We must remain vigilant of a federal government that labels parents as 'domestic terrorists' for opposing CRT and that would send the FBI to crack down on parents’ First Amendment rights," Rokita told Fox News.

In response to Garland's "disturbing admissions" under oath, the plaintiff coalition of states served the Biden administration with FOIA requests that sought "public records relating to the communications and White House meetings outlined by Attorney General Garland in his congressional testimony," the FOIA lawsuit, launched in March, said. The original FOIA requested all documents and communications between federal officials and the NSBA in connection to the original letter.

Attorney General Merrick Garland testifies at the Senate on the fiscal year 2023 budget of the Department of Justice. (Greg Nash/Pool Photo via AP)

Over a week after the Biden administration was sued for non-compliance with FOIA, the Justice Department issued new FOIA guidelines that claimed it "favor[ed] disclosure and transparency."

Garland said, "For more than fifty years, the Freedom of Information Act has been a vital tool for advancing the principles of open government and democratic accountability that are at the heart of who we are as public servants … [T]he Justice Department will work every day to uphold those principles, which are essential to the rule of law." 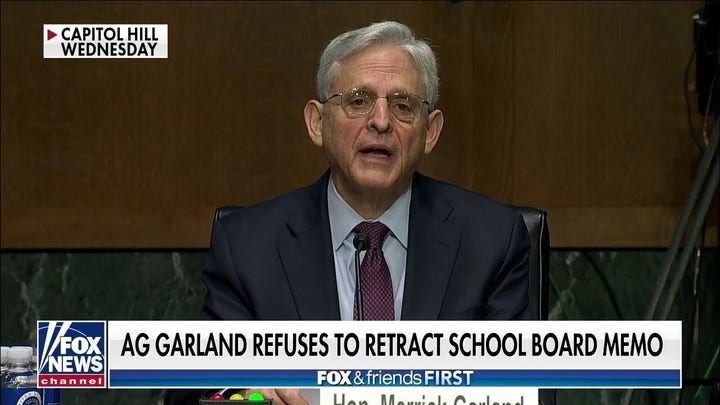 Then on April 25, the Biden administration filed a partial motion to dismiss the FOIA lawsuit, stating that they are not "agencies subject to the FOIA."

Fox News Digital reached out to the Justice Department for comment but did not immediately receive a response.

The fallout from the "domestic terrorists" NSBA letter was palpable to the organization.

The federation of state associations apologized and retracted its letter on Oct. 22, promising that it would conduct a review, and it would "announce specific improvements soon."

Fox News Digital asked the NSBA what those specific improvements were, but did not receive a response.

By 2022, 29 states had distanced themselves from the NSBA, according to Parents Defending Education.