In a new season of Fox Nation's "PARK'D," host Abby Hornacek traveled to some of America's greatest treasures, including Yellowstone National Park and Zion National Park in Utah.

'I think viewers will come away from this series with a deeper appreciation for the beauty and history of America," Hornacek told Fox News.

"Before this show, I was already a huge advocate for being a tourist in America, because there are so many incredible places to go," she continued. "But when you actually go to these places are hear the stories of the geology and the history of how they came to be, it really enriches the experience -- and that's what I wanted to share."

ABBY HORNACEK DOES DONUTS AT TALLADEGA

"Yellowstone stretches across three states," narrated Hornacek in her episode on Yellowstone National Park. "But we began our journey in Montana... Gardiner is a small and beautiful rural town, populated with just over 870 people.  It was officially founded in 1880 and became the main entrance to Yellowstone National Park when President Ulysses S. Grant signed the act of dedication law."

Her next stop in the flagship national park was Mammoth Hot Springs in Wyoming.

BEHIND THE SCENES WITH ABBY HORNACEK ON PARK'D

"As you can see behind me," said Hornacek pointing to the green and yellow rock formations of the springs, "These colors are unbelievable. It's actually caused by the warm water coming down from the spring feeding the organisms.  That's how you get that tapestry of color."

In PARK'D's visit to Zion National Park, Hornacek met up with Jonathan Zambella, who is the owner of Zion Guru, a guiding service.

Zambella took Hornacek on a mountain bike tour and explained the geology of the area. Unfortunately, Hornacek's day was not all fun and game. 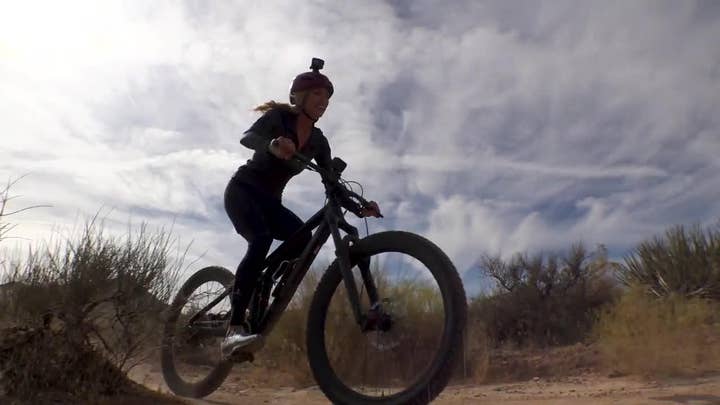 Not to worry though, Hornacek was uninjured and aware enough to make sure her Fox Nation producers got the spill on camera.

To watch all of the latest two episodes of PARK'D go to Fox Nation and watch for FREE.