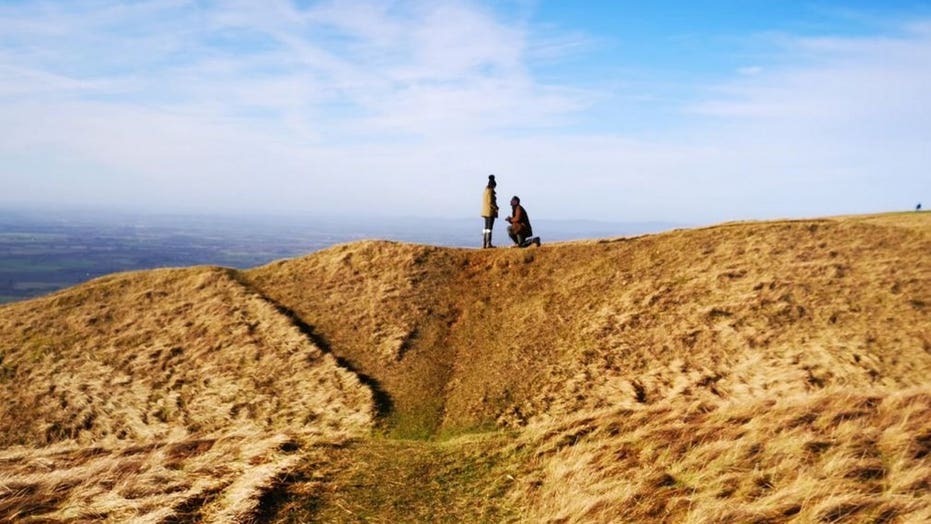 A woman in the U.K. has identified the mystery couple whose engagement she photographed during a stroll with her family last week.

Charlene-Louise Johnstone first shared the photo to Facebook on Jan. 18, telling her followers that she spotted the then-unidentified couple at Cleave Hill in Gloucestershire earlier that day.

The woman captured the couple's special moment while she was out for a walk with her family. (SWNS)

GROOM-TO-BE TELLS BRIDE SHE'S BEING UNREASONABLE ABOUT DRESS, ASKS IF HE'S IN THE WRONG

“Didn't fancy running up to them and giving them the photo and intruding in their moment… so if anyone wants to help share see if we can find them as I'm sure they'd like the photo,” Johnstone wrote in the post, which soon went viral with over 17,000 shares to date.

"They were hugging and were emotional. She was wiping away tears and I’m pretty sure it was a ‘yes,’" she added, per SWNS.

The story soon took off, with some commenters offering to share the photo on their own social media accounts. And within days, the mystery lovebirds became aware of Johnstone's picture.

On Monday, Johnstone explained in a follow-up post that the couple reached out after learning of her efforts — and they were absolutely delighted at the response their photo had generated.

“Just want to say a huge congratulations to this lovely couple on their engagement,” Johnstone posted to Facebook on Monday, along with a photo submitted to her by the bride- and groom-to-be.

They also told Johnstone that they preferred to remain anonymous for the time-being, but confirmed they were “over the moon with the photo I took, the reaction and all the lovely comments received,” she wrote.

Johnstone’s story also brings to mind a similar search effort that was launched in October 2018, after a photographer captured a stunning engagement on a far-off peak at Yosemite and enlisted the Internet’s help in identifying the couple.