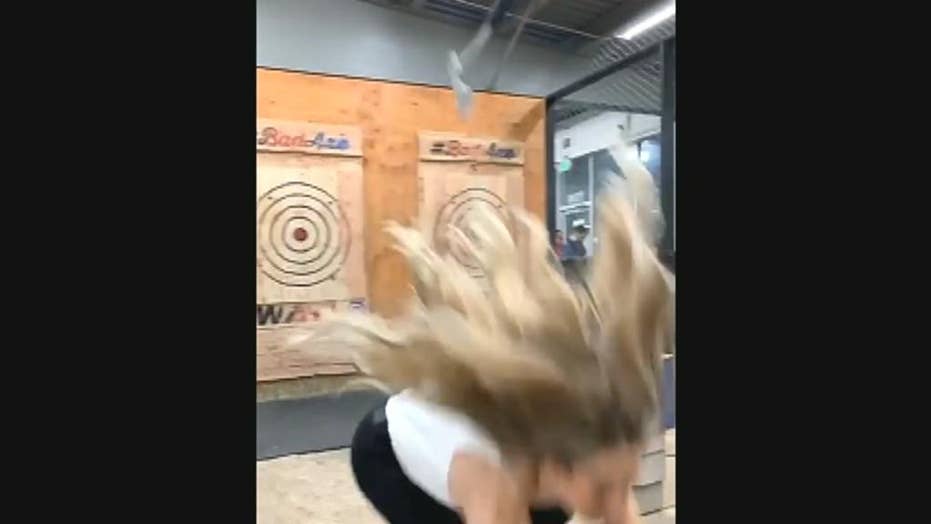 A young woman named Ainsley narrowly dodged an ax accident when she tossed her shaky weapon toward a wooden target, only to have the ax ricochet off the wall and nearly impale her forehead. Her friend captured it all on her cell phone.

One woman is thanking her lucky stars – and quick reflexes – for keeping her out of harm’s way when a ricocheting ax she threw in an indoor venue nearly struck her in the head.

On April 8, Instagram user Ainsley Rae shared video footage of the close call to the social media platform, where it has since been viewed over 126,000 times to date, Inside Edition reports.

In the clip, the woman holds the ax above her head, and throws it with force towards a target – though the heavy tool quickly rebounds back and flies towards her head. Rae ducks down instinctively, while others shriek in the background.

"At first I didn’t know what actually happened but then over time, watching it over and over again, I just started laughing at myself,” Rae told Inside Edition of the terrifying moment. “Oh my gosh, I am so glad I didn’t get hit in the head.”

She added that she had not been drinking while ax throwing.

A representative for Bad Axe Throwing, which operates several ax-throwing entertainment venues, confirmed to Fox News that the incident took place at its Denver location, but described the event as a "one-in-fifteen-million" occurrence.

“I think in the past year alone, all of our guests have thrown over 15 million axes, so to say it’s literally a one-in-a-million throw, it’s more like a one-in-fifteen-million throw," said Mario Zelaya, a representative for Bad Axe, who compared the incident to a freak accident that a runner or a bowler might suffer.

Zelaya further confirmed that while all guests are required to sign waivers, they are also paired with coaches who give them safety training before they participate in any ax-throwing. In this case, Rae's coach was standing just off-screen. The camera also didn't capture the arc of Rae's ax, Zelaya says, which showed that it hit the ground handle-side down, bouncing off the floor first, then the wall, and then over her head.

“That axe almost got me,” Rae wrote on Instagram of the now-viral clip, tagging her boyfriend, Cam Huber, who caught the unbelievable moment on film.

“So glad it missed you!” she concluded of the post, which has since won over 6,000 likes.

“That was way too close,” one Instagram commenter exclaimed.

“Oh my goodness,” another agreed.

Coaches at Bad Axe have since been trying to replicate Rae's throw for research purposes, though they have yet to be successful. Bad Axe also confirmed that it is taking measures to prevent anything like this from happening again, including looking at new types of handles.

But according to Zelaya, Rae was "super cool" during her visit and actually quite good at throwing, as she stuck the ax directly in the center of the target just before her now-viral throw. She's also coming back for one-on-one lessons with the current ax-throwing world champion.

Rae did not immediately return Fox News’ request for comment on the story.