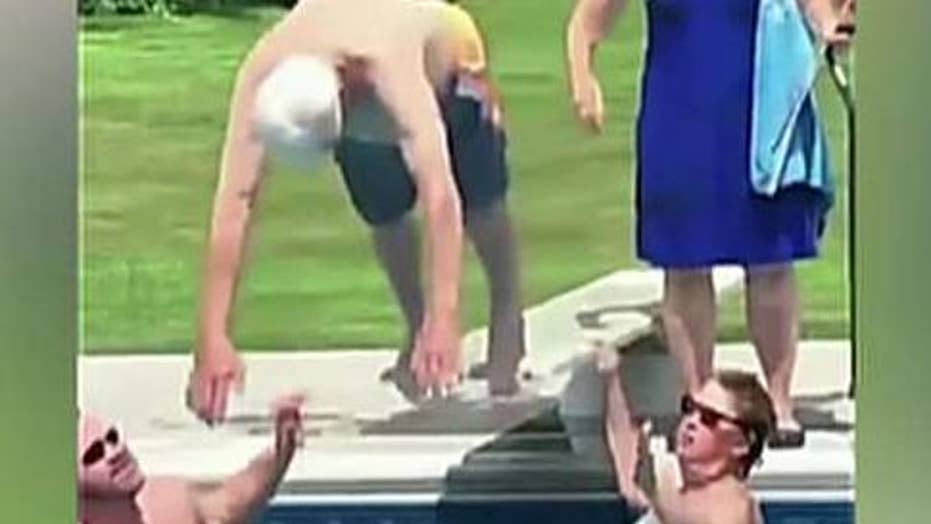 The WWII and Korean War veteran jumps into water after a boy was too scared to dive.

One fearless 95-year-old veteran is making waves for motivating a frightened youngster to jump into a neighborhood pool — by diving in himself.

Footage of U.S. Air Force veteran Michael Bliss, who served in both World War II and the Korean War, is going viral on Facebook after he performed the daring stunt.

During a recent pool day, Bliss spotted a young boy feeling anxious about leaping off the diving board, and took action by acting as an example, Fox & Friends reports. With the help of family and friends, the nonagenarian stepped on the board, flexed his arm muscles and jumped right in, to rousing cheers and applause.

“He is very spry for his age ─ he’s 95 soon to be 96 years old and is both a WWII and Korean War veteran in the U.S. Air Force. He is full of amazing stories and has a song for every situation," Bliss’ daughter Christine Ross told USA Today.

“Little did we know he would actually dive. He said soon after this video that he wants to be seen around the world,” grandson Kevin Ross agreed.

Brave Bliss isn’t the only family member who has served; his wife of 72 years is also a veteran, having served in the Coast Guard as an administrative aid.

Meanwhile, the footage of the dive has since gone viral, having been viewed a whopping 27 million times via Facebook page Militarykind Stories. Bliss’ story has also been met with an outpouring of support and thanks.

“OMG my anxiety level went through the roof when he teetered on the end of the board ... great job .. STILL and ALWAYS will be a HERO!!!” one user wrote.

“Way to go sir! Thank you and your wife for your service,” another fan added.

“Bless his heart thank you sir for your services in the military but you're also a hero to a little boy that was afraid to go in the pool,” another agreed.