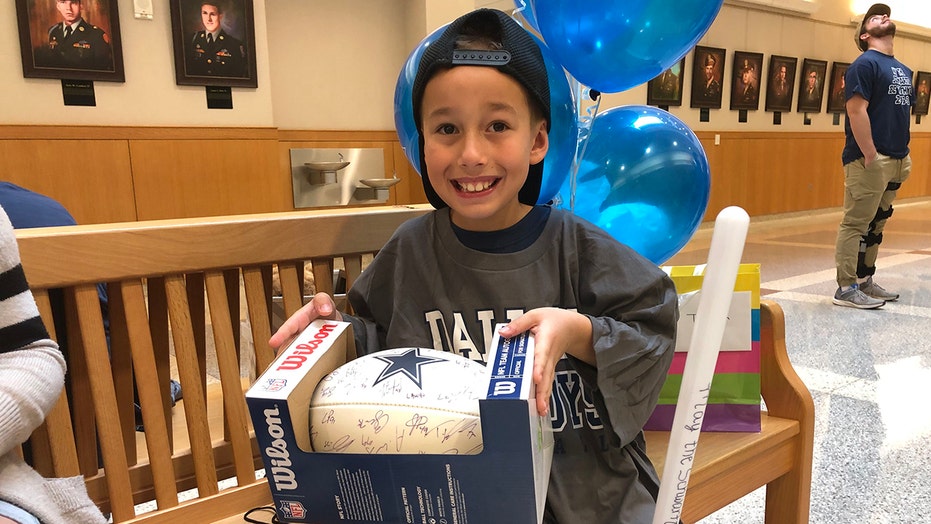 An 8-year-old boy in Texas is finally getting the family he always wanted after being in the foster care system for half of his life.

Nike Garza was celebrated by more than 300 people inside of a Collin County courtroom on Monday during a special adoption ceremony that included an appearance from Batman and swag from the Dallas Cowboys.

Nike Garza was adopted by David and Kristi Schwartz, joining their other two children – one of which is also adopted. (Photo: Courtesy of Buckner International)

After living 1,553 days as a foster child, Nike was adopted by David and Kristi Schwartz, joining their other two children – one of whom is also adopted. In attendance during the special occasion were the second grader’s friends, classmates and members of his church -- all wearing T-shirts that read "May the Schwartz be with you," which was a play on his new family's surname and a quote from 1987 movie "Spaceballs."

In a video posted on Twitter by adoption agency Bucker International, a smiling Nike is seen being embraced by loved ones on his special day and even dancing in celebration.

Nike also got a huge surprise when he was gifted with a football signed by his favorite NFL player Cowboys quarterback Dak Prescott and the entire 2019 Cowboys team. He also received other Cowboys apparel goods.

Nike got a huge surprise when he was gifted with a football signed by his favorite NFL player, Cowboys quarterback Dak Prescott and the entire 2019 Cowboys team. (Photo: Courtesy of Buckner International)

“We were blessed to walk hand in hand with the Schwartz family during the process of adoption. Nike is loved so much, as evidenced by the 300 friends and family who came to his adoption. He truly completes the family.”

While Nike finally has his forever home, Harrison highlighted the fact that there are still more than 442,000 children in foster care in the U.S., 33,000 of whom are in Texas alone.

“There is such a great need in our country for foster parents to provide temporary to long term care for vulnerable children,” she added.