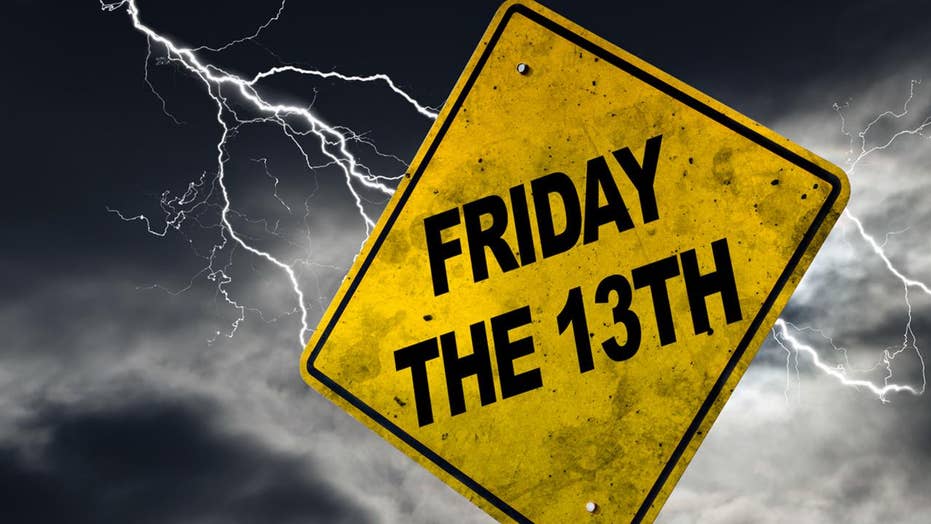 Why Friday the 13th is a superstitious day

If you are superstitious or a triskaidekaphobe, Friday the 13th has a scary place in your heart. Watch the video and find out where some of the folklore surrounding Friday the 13th originated.

My-day the 13th! This is the moment a dad in the U.K. granted his son's birthday wish – to be picked up from school by Jason from “Friday the 13th.”

Sam Murphy wanted to surprise his son Carter, who has ADHD, with a special treat for his big day. He asked Carter what he wanted and was told his one wish was to meet the legendary villain and serial slasher Jason Voorhees.

Sam Murphy recently surprised his son Carter with an extra special birthday present- being picked up from school by legendary villain and serial slasher Jason Voorhees from the "Friday the 13th" horror film franchise. (SWNS)

Despite warning his son that it would be difficult to pull off, Carter found “Jason” waiting for him outside the school gates and the pair walked home hand in hand.

"I spoke to the school about it and they said they didn't want Jason waiting at the school gates so he had to be round the corner,” said Sam, 45, from Plymouth, Devon, England. "It was quite a nice experience, he was walking down the street holding hands with Jason. He has issues with touching, he won't hold my hand."

On his birthday, Carter found “Jason” waiting for him outside the school gates and the pair walked home hand in hand. (SWNS)

The horror movie role was played by local makeup and special effects expert Tony Gartland, who took on the job to make himself look just like the “real” Jason Voorhees.

The scene played out on Carter's birthday on January 30 and was filmed by Sam.

"Carter hasn't shut up about it, Jason gave him a t-shirt and he hasn't taken it off since. I can't get it in the wash,” Sam revealed. "Jason came into the house with his shoes on and Carter said, 'Dad, Jason left his shoes on' and I replied, 'Well, I'm not telling him to take them off.'

"Carter hasn't shut up about it, Jason gave him a t-shirt and he hasn't taken it off since," the dad revealed. (SWNS)

"They went to his bedroom and Carter was showing all his favorite toys, he showed him everything,” he continued. “Carter then brought Jason downstairs and then he had to go, and I said we'd drop him off in the city center so he could go on a killing spree.”

Carter's one birthday wish was to meet  the legendary villain and serial slasher Jason Voorhees. (SWNS)

"Carter was so excited, he hasn't stopped speaking about it since. Tony didn't break character once, he was great."

Gartland, who lives in Saltash, Cornwall, owns a special effects and T-shirt printing business and has plenty of experience with costume make-up, masks and costumes.

He said he's always been a horror fan and has even attended horror conventions as Jason Voorhees.