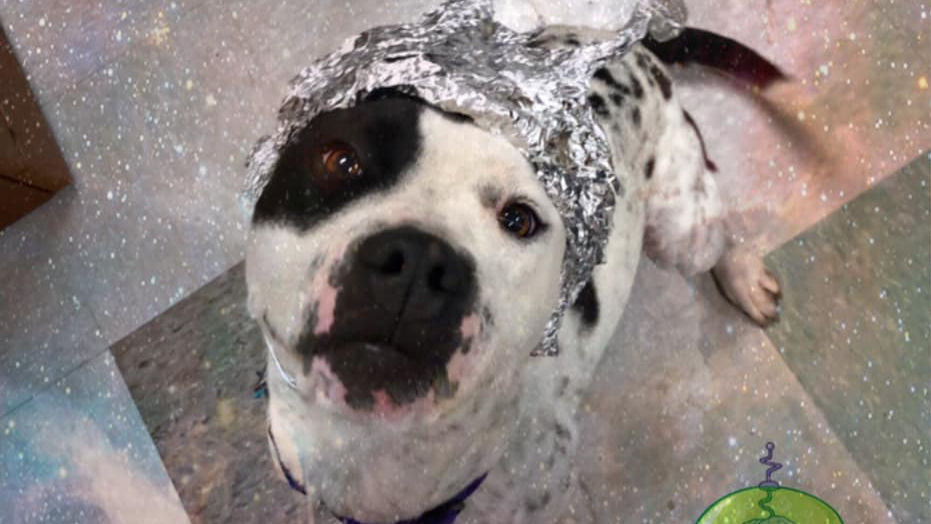 An animal shelter in Oklahoma claims the response to its Area 51-themed post has been “out of this world” after photos of the facility’s protective, “alien-flighting” pets went viral.

OKC Animal Welfare, in Oklahoma City, had originally asked folks to “come storm our shelter” on Friday, in a silly social media post poking fun at the Facebook group that allegedly intends to storm Area 51 in September.

SEE IT: OVERWEIGHT CAT GETS SENT OFF TO FAT CAMP

“We have great animals ready to protect you from the Area 51 aliens,” the animal shelter wrote in its post, which served as a call to adopt and/or donate to the facility.

OKC Animal Welfare also shared pictures of some of its dogs wearing tin-foil hats, and a message reading “Adoption isn’t that far out of this world.”

In the days since, OKC Animal Welfare has confirmed that some of the animals featured in the post, including Piper, a pointer-and-boxer mix, and Sam, a Labrador mix, have been adopted. Over $2,250 have been raised for the Patrons of the Oklahoma City Animal Shelter, too.

“The response to #stormtheshelter has been out of this world! Thank you all who have supported, shared, donated and adopted,” the shelter wrote on Monday morning. The facility also asked that anyone adopting the animals tag #stormtheshelterOKC when sharing photos of their new furry friends.

“Let’s continue to show everyone that adoption isn’t that far out of this world and support your local shelters!” OKC Animal Welfare added.

To that end, the shelter also shared a picture of yet another adorable dog – wearing a flying saucer on her back – that was available to adopt.

“Pictured is alien-fighting Daisy 313178,” OKC Animal Welfare wrote. “She is a 4-month-old border collie mix and is just an absolute joy to be around!”

The “Storm Area 51” movement, which the OKC Animal Shelter is referring to, first started gaining traction after what was meant to be a satirical Facebook post started going viral earlier this month, with 1.9 million now saying they will be "going" and another 1.4 million claiming to be “interested” in raiding the top-secret facility near Groom Lake, Nev.