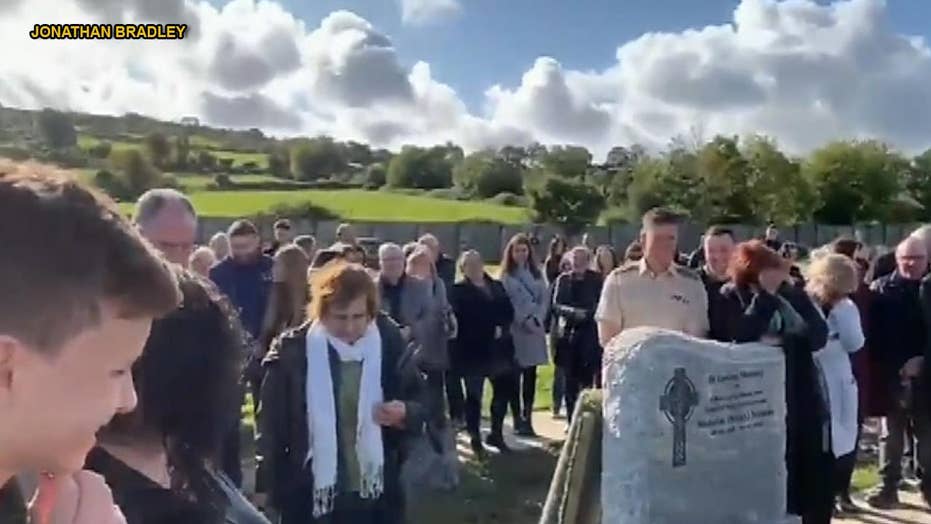 Irish prankster gives family one last laugh with a pre-recorded funeral message, from the grave

A deceased Irish prankster, Defense Forces veteran Shay Bradley, pulled one last joke on his family, as a pre-recorded message was played at his funeral. In the message, Bradley is heard calling out as if he was stuck in his coffin. Those at the funeral were laughing and crying at the man's darkly humorous prank. Bradley's daughter said it was his dying wish to leave the pre-recorded message.

This Irish funnyman is really trying to put the fun in funeral.

A Dublin dad turned his own funeral into a comedy show when family members played a message he had pre-recorded.

In the message, the deceased man, Defense Forces veteran Shay Bradley, is heard calling out as if he was stuck in his coffin at his funeral, held in Dublin over the weekend.

“Hello, hello – let me out!” Bradley is heard shouting and knocking in the one-minute-thirty-second clip.

“Let me out! It’s f---ing dark in here,” he goes on before jokingly calling for the priest, saying he’s stuck in the box.

The deceased man, Defense Forces veteran Shay Bradley told his daughter it was his dying wish to leave the pre-recorded message. (Courtesy of Andrea Bradley)

Those at the funeral were laughing and crying at the man’s darkly humorous prank.

His daughter, Andrea Bradley, shared the message on social media where it has gone viral, writing that this was her dad’s dying wish.

“Always the pranksters, ya got them good Poppabear and gave us all a laugh just when we needed it!! I will love you forever,” she captioned the video, along with the hashtag “shayslastlaugh.”

According to Andrea, her dad pre-recorded the message after he learned he was dying of a “long illness” and wanted to make his friends and family laugh one more time.

Since posting the video, Andrea wrote that her family has received many responses from those who were touched by the video.

“Myself and my Family are overwhelmed with the Amazing response and comments we have received regarding my dad's funeral, he truly is a legend and was the most amazing man!!! He would be overjoyed to know how many smiles and laughs he has given to every one. Thank you all,” she wrote.