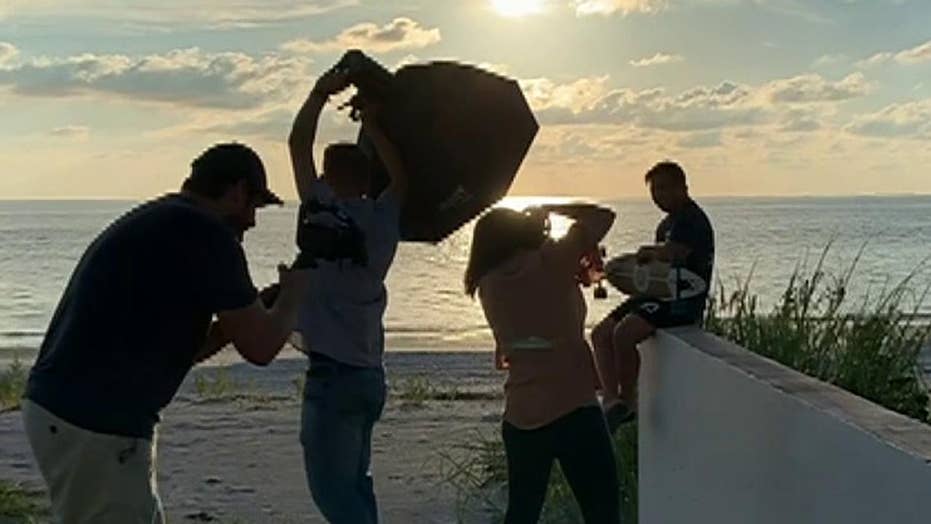 Behind the scenes video from the photo shoot.&nbsp;

A Florida beachwear company has featured a 16-year-old model with Down syndrome in its new ad campaign, with the goal of hopefully inspiring other companies to become more inclusive.

Ethan Holt, 16, of St. Petersburg, modeled for Surf Style, a clothing and souvenir retail chain, and is featured in the company’s new digital and social media campaign.

“It’s definitely a mama’s proud moment,” Holt’s mother, Phoy, said, adding that she’ll get emotional from the outpouring of support and attention.

A Florida beachwear company has featured Ethan Holt, a 16-year-old model with Down syndrome, in their new ad campaign. (Surf Style)

FREIA DAVID, WOMAN WITH DOWN SYNDROME WHO WORKED AT MASSACHUSETTS MCDONALD'S FOR 32 YEARS, DIES AT 55

She said her son loves the water and has been on the Special Olympics paddleboard team and swim team, so modeling for a beachwear company was the perfect gig.

“I guess that you can say that it was a match made in heaven,” Phoy said.

Surf Style close Holt for its campaign after representatives from the nonprofit organization Help Us Gather (HUG), which has worked to break down barriers for those living with disabilities, introduced the aspiring model to executives last month.

According to Surf Style's website, the company wanted to include Holt because of his charisma, love of the camera and to set an example of inclusion.

Surf Style decided to use Holt in their campaign after a nonprofit group introduced him to executives last month. (Surf Style)

“We strive to create an atmosphere of inclusion in all of our stores," said Surf Style's marketing manager, Tara Malinasky. "We hope this sets an example for other brands to feature those with disabilities in their marketing efforts, as well," she said.

The photo shoot took place on July 30 outside and inside Surf Style's flagship store in Clearwater Beach, which is about 45 minutes from Tampa.

HUG’s founder Robin Lally said the nonprofit had been working for months to help Holt jumpstart his modeling career, but at first, local talent agents told her there “isn’t a market” for models who live with a disability.

The photo shoot took place on July 30 outside and inside Surf Style's flagship store in Clearwater Beach, which is about 45 minutes from Tampa. (Surf Style)

Lally, citing a report from the Centers for Disease Control and Prevention, said 1 in 4 U.S. adults live with a disability, “but advertising campaigns rarely include people with disabilities.”

“Surf Style’s decision to feature Holt is big step toward a future where people of all abilities feel included and represented,” Lally explained.

Holt told Fox News he would like to continue modeling and hopes to get booked for more gigs in the near future.