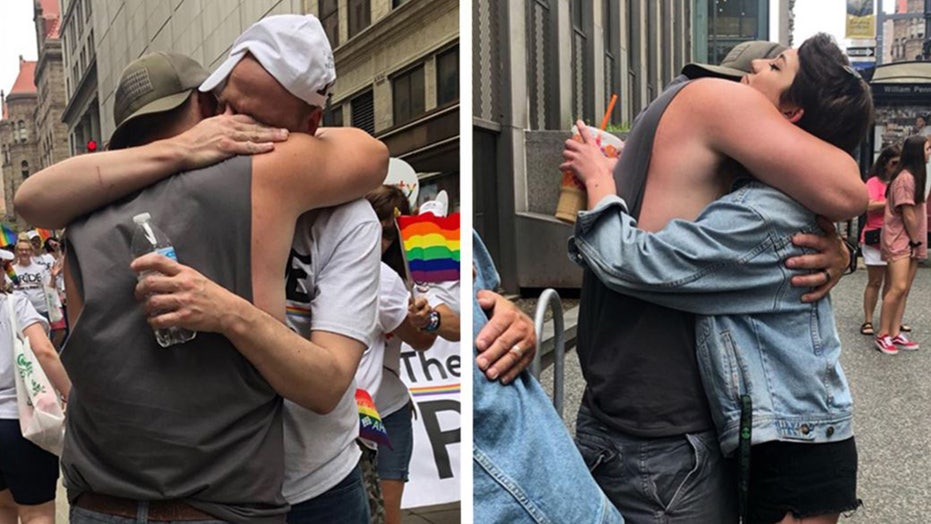 One Pennsylvania man has gone viral on social media for sharing the story of his bittersweet exchanges with two strangers at the Pittsburgh Pride parade. The empathetic dad urged others to imagine the immense “depths of pain” people may feel for being rejected by their family members for loving who they love, or for what they believe.

On June 9, Howie Dittman detailed on Facebook that he attended the Pittsburgh Pride Parade with a group who wore “free dad hugs” and “free mom hugs” shirts. He said that although some of the embraces he shared with paradegoers at the LGBTQ community-rallying event were “super happy,” two particular huggers approached him with heavy hearts.

“He was kicked out at 19 when his parents found out. They haven't spoken to him since,” Dittman said of one anonymous man who “sobbed” in his open arms. “I felt a tiny bit of that pain that he carries with him every minute of every day. He was abandoned because of who he loves.”

“He was participating in a celebration of love when he was brought to his emotional knees by a shirt that said "free dad hugs" on a complete stranger,” the author continued.

One unnamed woman, too, moved Dittman. Noting that while he didn’t know the “specifics” of her story, she came to him with “tears in her eyes” and gave him “a look of sadness and helplessness that I'll never forget” as she hugged him tight.

Thanking him “endlessly,” Dittman admitted he couldn’t help but wonder what her family life may be like.

“Who does she go to when she needs advice on love, money or just life? Who does she share old memories with that only her parents would have been there for?” he wrote. “What are her holidays like? How often does she hope for that phone call, with unconditional love on the other end?”

“I don't know her story. But it doesn't feel like a huge leap to assume she's lost those who should love her the most and forever,” he continued.

“Imagine that, parents. Imagine that your child feels SO LOST FROM YOU that they sink into the arms of a complete stranger and sob endlessly just because that stranger is wearing a shirt offering hugs from a dad,” Dittman mused. “Think of the depths of their pain. Try to imagine how deep those cuts must be.”

The emotional tribute evidently touched the hearts of many, as it has gone massively viral online. (Howie Dittman)

In the wake of the story going far and wide online, Dittman told Fox News that he attended the Pride parade with local volunteer group Helping Butler County, which he founded a few years ago with the simple mission of helping those in need in the community, however possible.

“We went down to Pittsburgh to hand out some hugs and create some smiles, but left with a deeper understanding of the abyss of pain left in those who lost the support of their families simply due to who they love,” the Karns City man told Fox News. “Seeing and feeling the joy and pain in people of all ages, and seeing some of them emotionally buckle at the simple idea of a ‘dad hug’ was overwhelming.”

“They would be laughing and smiling and singing, enjoying the festive atmosphere, then see our 'hugs' shirts and switches would flip," he continued. "It was incredibly powerful and humbling to be a part of those moments.”