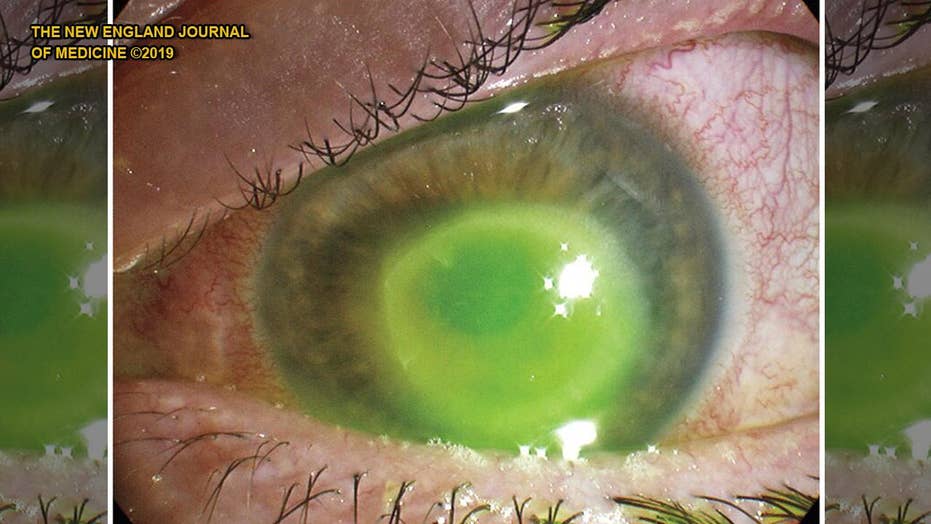 Woman who wore contact lenses while showering, swimming nearly blinded in one eye

A rare infection caused a woman in England to nearly go blind in one eye, after wearing her contact lenses while showering and swimming. According to the CDC, the infection is due to the improper storage, handling or disinfecting of contact lenses. The woman was treated for the infection, which resolved. But the vision in her left eye was not restored even after the infection cleared.

Heads up, contact lens wearers: A woman in England was nearly blinded in one eye after contracting a rare but serious infection likely caused by wearing her contact lenses while showering and swimming.

The 41-year-old woman’s case was recently detailed in The New England Journal of Medicine (NEJM).

The woman, who was not identified in the report, went to an ophthalmology clinic “with a 2-month history of intermittent pain, blurry vision and sensitivity to light in her left eye,” according to the report. She told ophthalmologists she wore monthly disposable soft contact lenses, which she said she did not remove before showering or swimming.

EYE DOCTOR WARNS AGAINST SLEEPING IN CONTACT LENSES WITH GRAPHIC IMAGES: 'PEOPLE NEED TO SEE THESE'

“The patient had difficulty keeping her left eye open during the physical examination, which revealed redness of the conjunctiva,” the report continued, noting at the time of the exam the woman had 20/20 vision in her right eye but 20/200 vision in her left.

Doctors later diagnosed the woman with acanthamoeba keratitis, “a vision-threatening infection most commonly associated with contact lens wear,” according to the NEJM case report.

The woman was nearly blinded by the infection. (The New England Journal of Medicine ©2019.)

More specifically, according to the Centers for Disease Control and Infection (CDC), acanthamoeba keratitis is caused by “a microscopic, free-living ameba (a single-celled living organism) called Acanthamoeba.”

“Acanthamoeba causes Acanthamoeba keratitis when it infects the transparent outer covering of the eye called the cornea. Acanthamoeba amebas are very common in nature and can be found in bodies of water (for example, lakes and oceans), soil, and air,” the CDC added.

The infection is rare, with current estimates at one to two cases per million contact lens users, according to the federal health agency. The infection is more likely in those who improperly store, handle or disinfect their lenses. Those who swim, use hot tubs or shower while wearing lenses are also at a higher risk of infection.

The woman in NEJM was treated for the infection, which resolved. But the vision in her left eye was not restored even after the infection cleared, according to the report.

“The vision in her left eye was not restored, owing to a dense, central corneal scar and cataract. Twelve months after the initial presentation, the patient underwent deep anterior lamellar keratoplasty, which resulted in a postoperative visual acuity of 20/80 and no discomfort in her left eye,” it added.

In May, an eye doctor urged those who wear contacts to think twice before sleeping in their lenses — whether they're hard or soft. At the time, Dr. Patrick Vollmer, an optometrist with the Vita Eye Clinic in Shelby, North Carolina, shared graphic images of a patient he recently treated who developed a cultured pseudomonas ulcer after sleeping in contact lenses to send a warning about a habit some may consider harmless.