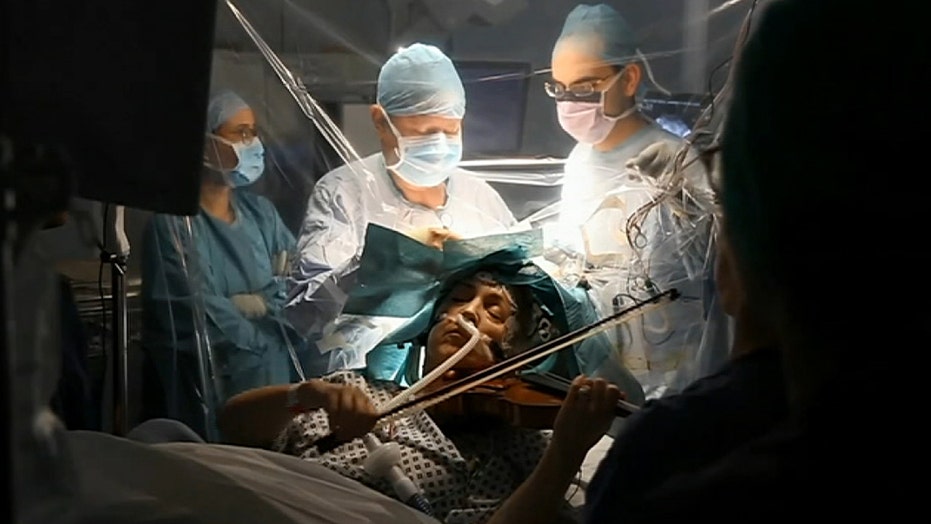 The incredible moment an orchestra violinist played her instrument while surgeons operated on her brain was captured on video and has quickly gone viral.

Dagmar Turner, 53, underwent surgery to remove an aggressive brain tumor on Jan. 31 at King’s College Hospital in London, according to a press release.

The tumor was located in the right frontal lobe, which controls movement in her left hand. Turner’s consultant neurosurgeon, Professor Keyoumars Ashkan, is a pianist and also holds a degree in music, according to the hospital’s press release. Ashkan knew how important preserving his patient’s ability to play the violin was. He devised a plan that would bring her out of anesthesia during surgery to play the instrument in order to ensure that no damage was done to the frontal lobe.

“The violin is my passion; I’ve been playing since I was 10 years old,” Turner said in the press release. “The thought of losing my ability to play was heartbreaking, but being a musician himself, Prof. Ashkan understood my concerns. He and the team at King’s went out of their way to plan the operation – from mapping my brain to planning the position I needed to be in to play.”

Ashkan explained that the hospital typically will have brain surgery patients perform language tests, but Turner is his first patient to have ever played an instrument during an operation. While the team performed a craniotomy, Turner was carefully brought out from under anesthesia and instructed to play the instrument while the tumor was removed.

“We knew how important the violin is to Dagmar so it was vital that we preserved function in the delicate areas of her brain that allowed her to play,” Ashkan said in the press release. “We managed to remove over 90 percent of the tumor, including all the areas suspicious of aggressive activity while retaining full function in her left hand.”

Turner, who was initially diagnosed with a grade 2 glioma in 2013 after suffering a seizure, had already undergone radiation in hopes of controlling the tumor, but it recently became more aggressive. Just three days after the operation, Turner was able to go home to her husband and teen son.

“Thanks to [Ashkan and his team] I’m hoping to be back with my orchestra very soon,” Turner said.