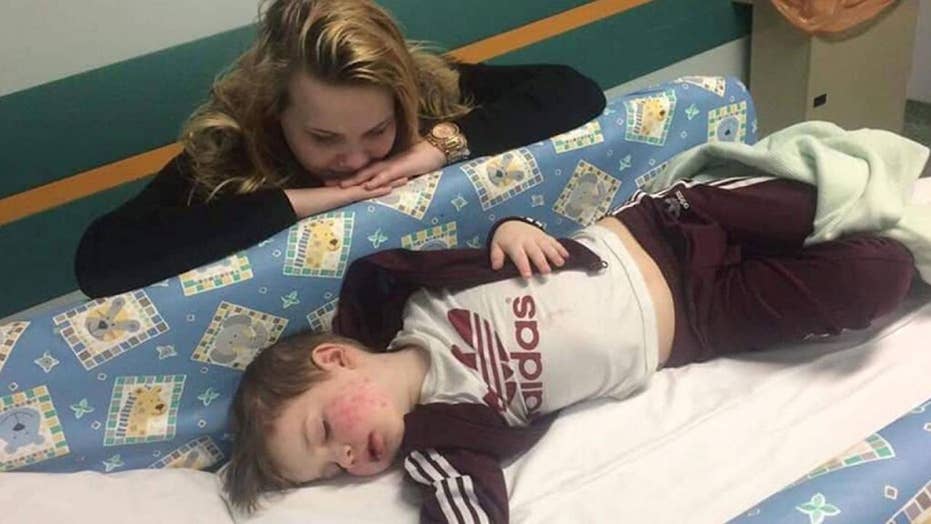 A mother in the U.K. is speaking about the dangers of an oft-overlooked virus that could be life-threatening for young children after her son contracted herpes likely through a kiss from a relative. Hayley Etheridge was 35 weeks pregnant with her youngest son when she noticed her 3-year-old had a rash across his face.

Etheridge told Manchester Evening News that when Baylie-Grey became lethargic, she took him to the doctor, who recommended he go to North Manchester General Hospital. There he was diagnosed with HSV-1 Herpes Simplex Virus.

OFFICERS LINE UP IN TRIBUTE TO BOY WITH CANCER ENTERING HOSPICE

Most people are first exposed to HSV between ages 1 and 5, and when a child develops a cold sore for the first time, blisters typically spread beyond the lips to the mouth and gums. A child may also develop fever, swollen and tender lymph glands, sore throat, irritability and drooling. But the virus can also spread to the eyes, which can lead to an infection of the cornea, which in severe cases may lead to scarring of the cornea or blindness, according to HealthyChildren.org.

Baylie-Grey from Prestwich, Manchester, was rushed to the hospital after a red rash spread across his face and he became overly lethargic. (Caters News)

HSV can be especially threatening for children under 6 months of age, as their immune systems are not well developed. Signs of exposure may begin with a low-grade fever and one or more small skin blisters. Newborns with the virus can become very sick quickly, with symptoms progressing to high fever and seizures, or even death, according to the New York State Department of Health.

Most people with HSV-1 can shed it in their saliva even if they are not symptomatic. Newborns can be exposed through close contact with someone who is shedding HSV-1 in their saliva or has an active HSV-1 outbreak, which is what Etheridge wants people to be more aware of.

“When doctors told me it was herpes I was shocked, people assume it’s always sexually transmitted but it’s not,” she told Manchester Evening News. “I remember sitting and crying talking to doctors asking them questions and getting answers no mother wants to hear.”

Etheridge said she “had no idea” that a cold sore could put her son in such danger, and was especially alarmed when she learned that it could be life-threatening for her unborn son.

“Doctors told me that if I passed it on to my newborn baby it could cause blindness, brain damage or he could even be stillborn,” she said, according to Manchester Evening News. “I was sat there thinking I have one child in a really serious situation and now I am being told my other baby could die. I have never been so scared in my life.”

Etheridge said while her family's story has a happy ending, she knows others do not which is why she is helping to spread awareness of the virus.  (Caters News)

She said her doctors’ careful monitoring and Bailey-Grave’s prompt treatment prevented the family from falling victim to catastrophe, and that her unborn son, now 2, was born healthy.

“Even though my story has a happy ending, some people’s don’t,” she told the news outlet. “Even though what happened to my family is rare, it still happens.”

Treatment for children and adults with the HSV-1 virus may include cream for cold sores, but typically do not require anything further. Newborns, however, require hospitalization and intravenous antiviral medication for 21 days. Even with the treatment, newborns may still suffer death or brain damage.

To stave off infection, it is recommended that adults wash hands thoroughly with soap and water before touching a newborn, and to contact a doctor immediately if there are any signs of HSV infection.

Other mothers have come forward with their cautionary tales, which has helped other new parents be aware of possible signs. Such was the case for a Texas mother, who said a heartbreaking post written by a grieving mother last year who lost her 12-day old baby to the virus helped save her own daughter’s life.

“How do you tell a mother, ‘Thank you for sharing your story of losing your newborn baby to save mine’?” Ashley Pool told KBTX at the time. “Little Emerson, her short life here was worth something. It was worth something more than we could imagine, she was saving babies. Who else might she save?”