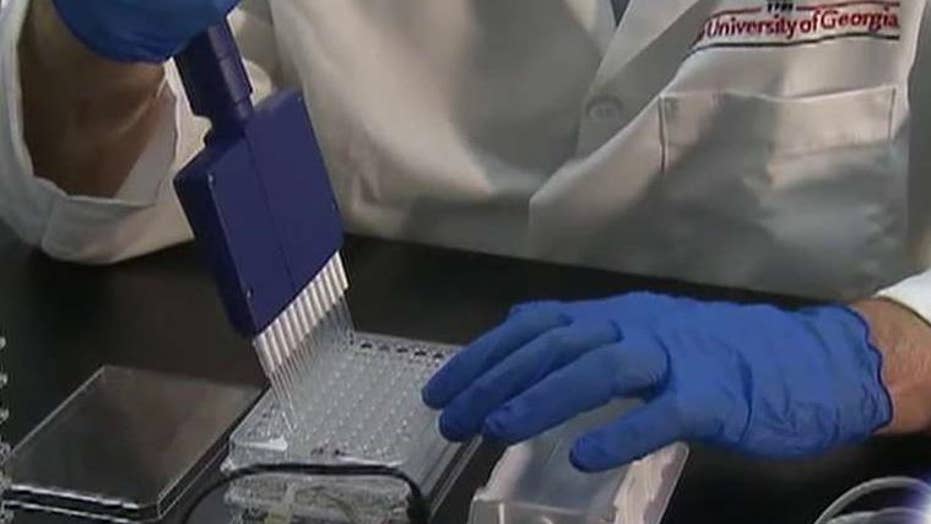 Researcher: Zika vaccine could be ready in two years

Scientists on the frontlines of the Zika virus battle are closing in on the mosquito-borne illness from multiple angles. Their efforts include fighting the bug with genetically engineered mosquitoes, searching for safer and more effective chemical pesticides, and developing medicines to treat or prevent Zika virus infections. International health officials suspect those infections are linked to increasing rates of birth defects as well as of a nerve disorder that causes paralysis.

“Our intention is to design a vaccine that we can bring to the market relatively rapidly, that will be a single shot vaccine and that will be effective against these new strains of Zika virus that are circulating in the Americas,” Ted Ross, director of the University of Georgia’s (UGA) Center for Vaccines and Immunology, told FoxNews.com.

UGA researchers are collaborating with metro Atlanta-based GeoVax Labs. By using the company’s vaccine platform, which has already been through the Food and Drug Administration (FDA) approval process, Ross said researchers may be able to develop a vaccine in five to seven years— much faster than the normal process, which can take 10 to 20 years.

“For emergency use, a vaccine could be on the market much faster if it’s needed,” Ross said. “It depends on how fast Zika spreads throughout the Americas and into the United States. So, that timeframe could be as short as two years if necessary.”

The company has produced a modified version of Aedes aegypti, the primary mosquito species that carries the Zika virus. When the modified males are released into the wild, they mate with female mosquitoes and pass on a gene that causes their offspring to die before reaching adulthood.

In field tests already conducted in the Cayman Islands, Malaysia and Brazil, Oxitec reports that its modified mosquitoes reduced the local Aedes aegypti population by more than 90 percent over a period of about six months.

The novel concept has given rise to unproven conspiracy theories, as well as some ecological concerns over the impact of removing a mosquito species from the environment.

Oxitec CEO Hadyn Parry said the wild Aedes aegypti mosquitoes are an invasive species that are not native to the Americas. And the self-limiting gene keeps the modified mosquitoes under control.

“What people perceive is that if you’re putting a new gene into the environment, that it will spread and it will stay there, and there’s no going back,” Parry told FoxNews.com. “Our system, of course, is the exact opposite. It’s self-limiting. It’s a dead end. The mosquitoes don’t survive. So, you can release our mosquitoes into the wild or into a town. And, if you wish to, you could stop and they would actually disappear from the environment. You wouldn’t find them after a few weeks.”

“Ours is actually much more of a precision instrument,” Parry said of his company’s genetically modified mosquito. “We’re just trying to combat the one species that’s spreading disease at the moment— this Aedes aegypti.”

Another drawback to fighting the spread of the Zika virus with chemical sprays alone is that Aedes aegypti mosquitoes prefer to bite humans over other animals. So, their breeding sites are often found near, or inside, people’s homes.

“It’s not like these mosquitoes are just in the swamp, in the rice fields, in the rural areas” said Dr. Phyllis Kozarsky, founder of Emory Healthcare’s TravelWell Center— one of the first medical centers in the U.S. to specialize in tropical and travel medicine. “These mosquitoes thrive around people.”

President Obama has asked Congress for $1.8 billion in emergency funding to expand mosquito control programs, vaccine development, and other efforts to combat the spread of the Zika virus. Although welcoming the investment, many doctors and public health officials say research and surveillance efforts need ongoing funding to better prepare for emerging threats of mosquito-borne diseases before they turn into international emergencies.

“Because of lack of funding and the burden of this kind of work, those programs sort of trickled away,” Kozarsky said. “And here we’re facing again a resurgence, or re-emergence of these diseases.”