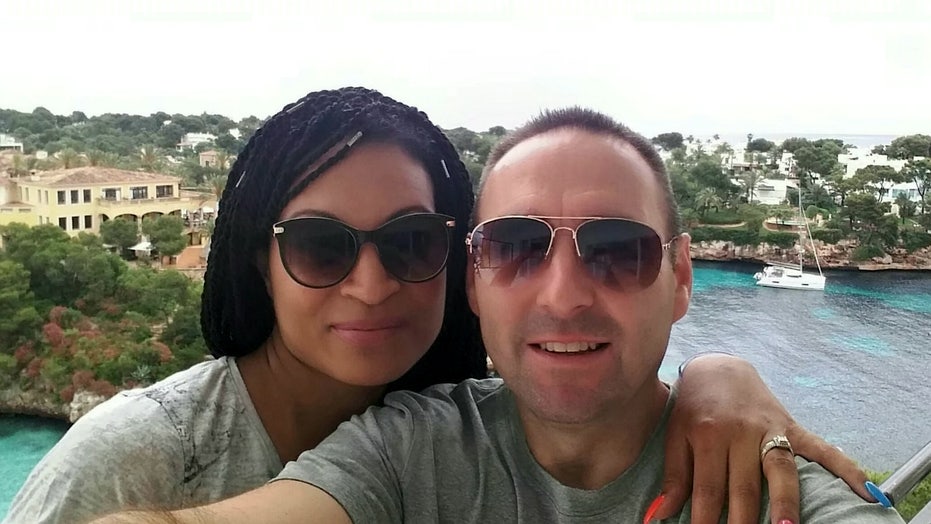 A mother who claims she was allegedly diagnosed with food poisoning on vacation in Majorca after she began experiencing painful headaches and vomiting said her extreme agony caused her to fly home, where she learned her suffering was actually caused by bleeding in her brain.

Caroline Johnson, pictured with her husband Philip on their family vacation in Majorca, said she is lucky to be alive. (SWNS)

“I’m glad I persevered – for my sake, but also for Jay and Kye,” Caroline Johnson, whose sons are 9 and 6, told SWNS.

Johnson said the family was enjoying their trip until she began experiencing a severe headache.

Johnson said she was forced to call for a hotel doctor after her symptoms left her in extreme agony. (SWNS)

“I nipped inside to change for the beach when I felt a smack on the back of my head – or something like it anyway – which is common for brain stuff,” Johnson, 42, told the news outlet.

Johnson said she suspected a sunstroke, but that a doctor called by the hospital diagnosed her with food poisoning.

“I thought I was dying,” she told SWNS of her pain.

When she flew home to Sheffield, in the U.K., her symptoms worsened and she developed double vision. It wasn’t until she collapsed at a friend’s house that she was taken to Northern General Hospital, where a CT scan showed a subarachnoid hemorrhage (SAH).

When she returned home she landed in the hospital after collapsing at a friend's house and learned that she had actually been bleeding in her brain for a week. (SWNS)

SAH is a life-threatening type of stroke caused by bleeding in the space surrounding the brain. It can be caused by a ruptured aneurysm or head injury, according to Mayfield Brain and Spine. Treatment requires stopping the bleeding and restoring normal blood flow to the brain.

Johnson was transferred to Royal Hallamshire Hospital where she underwent a two-hour procedure to repair the bleed and was discharged after 10 days. Doctors allegedly told her she had bled for seven days.

“It was unbelievable that I’d survived a hemorrhage for seven days,” she told SWNS. “The doctors said that shouldn’t have been the case.”