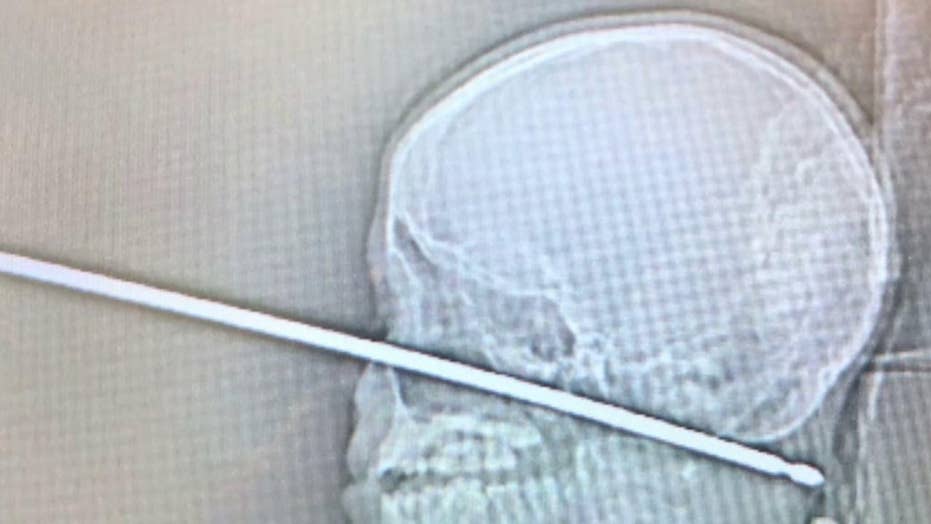 Boy survives being impaled through the face with meat skewer

A Missouri boy said watching the film "Black Panther" -- which won three Oscars Sunday night -- saved his life after he was impaled by a 12-inch meat skewer last year in what he called a "terrifying miracle."

Xavier Cunningham was playing in a treehouse with two friends when a swarm of yellowjackets attacked him and he tripped and landed on the BBQ stake. His mother rushed him to the ER and doctors commended Xavier Cunningham for remaining calm and resisting the urge to pull out the skewer, which could have caused permanent brain damage or death. But the 11-year-old Harrisonville boy said he knew exactly what to do after watching the fictional superhero flick.

"I watched 'Black Panther,'"  Xavier told CBN News, referring to what happened to Michael B. Jordan's character in the film after he was stabbed with a dagger. "At the end of it, how he just takes it out and dies – so I was like, 'Nope!'"

Xavier Cunningham at the hospital after he had the meat skewer removed from his face. The X-ray shows the skewer that went into the boy's face.

But ultimately, he credits Jesus who "gave His life for us and after this, it's just like He really truly is the God almighty."

Since the near-death experience five months ago, Xavier has made a full recovery and his scars are barely noticeable.

He said the incident brought his family closer to one another and to their faith.

"Every day I see a miracle in my house," his mother, Gabrielle Cunningham, said tearfully. "He is a living, walking miracle. The hand of God was on my son!"

And for the boy whose story became known as the "Missouri miracle," the mayor of his town declared a Saturday in October as "Xavier Cunningham Miracle Day."