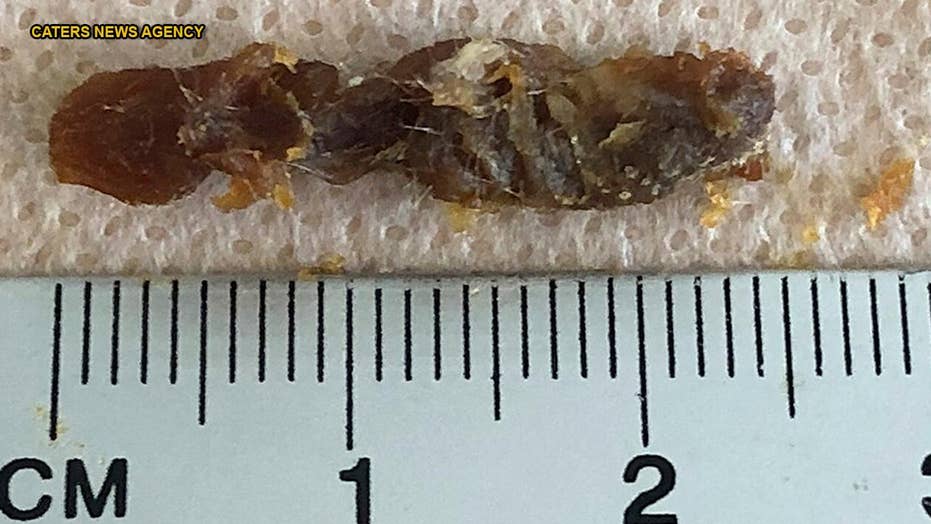 An audiologist was stunned when he tackled a monster blockage in a patient's ear, pulling out a massive earwax chunk during a procedure that was captured on video. The earwax measured at 1 inch, falling just 0.19 inches short of taking up the whole ear canal. The doctor said that despite the buildup, his patient's eardrum was 'intact and healthy.'

An audiologist could hardly believe the size of a massive earwax chunk he had just pulled out of his patient’s ear during a Feb. 22 procedure that was captured on video.

Neel Raithatha from The Hear Clinic &amp; Clearwax in Leicestershire was stunned when he tackled the monster blockage on February 22. (Caters News Agency)

“Wow! Look at that!” Neel Raithatha, a consultant audiologist at The Hear Clinic in Leicestershire, said in the video.

Raithatha said he couldn't believe how long the earwax was when he pulled it out. (Caters News Agency)

“Both the client and I were in complete shock,” Raithatha said, according to Metro.co.uk. “My reaction upon removal was ‘Wow’ and the client’s reaction when he saw the piece of ear wax himself was to say, ‘Oh my goodness.’”

Footage from the procedure shows Raithatha using a suction tool to dislodge the wax through the patient’s ear. He told Metro.co.uk that despite the amount of buildup, his patient’s eardrum was “intact and healthy.”

He had estimated it to be 3-centimeters long, which would have taken up the patient's entire ear canal, but it was .5-centimeters shy of that measurement.  (Caters News Agency)

Experts say that some earwax is good for the ears, and patients should generally leave it alone. Earwax acts as a natural cleanser and moves from the ear canal outward collecting dead skin cells, hair and dirt on its way, according to Harvard Health Publishing. But an ear canal backed up with earwax may cause earaches or infections, or even other issues such as a cough or loss of hearing.

Seeking medical help to remove the earwax is one of the most common otolaryngology procedures in the U.S., according to Harvard Health Publishing. However, the American Academy of Otolaryngology-Head and Neck Surgery Foundation advises against overcleaning the ear canal to prevent irritation or infection. It also advises against using cotton swabs, hair pins, keys, toothpicks or other objects while attempting to clear the canal.