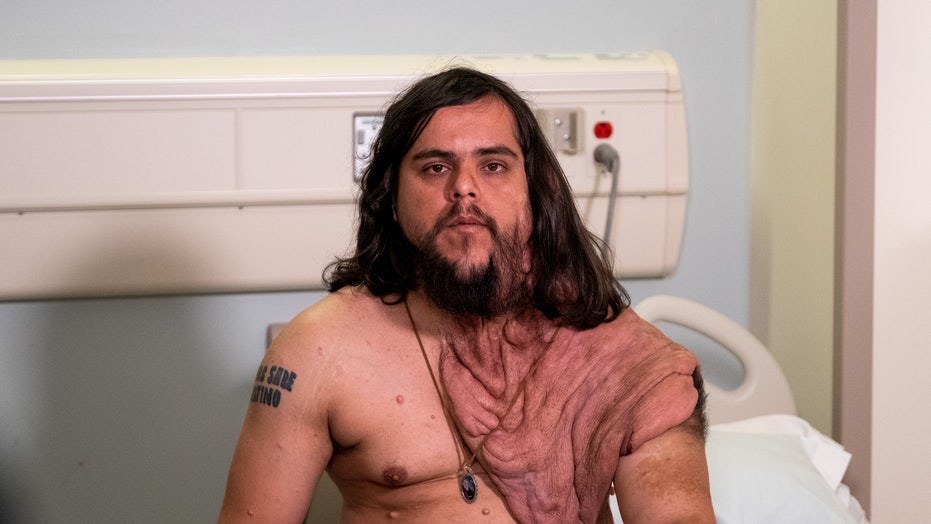 A 27-year-old man in Paraguay who endured a lifetime of bullying due to massive tumors that had grown on his upper body overheard his friend talking about a humanitarian organization that was providing medical care in his area and decided to book a consultation. That’s how Enrique Galvan, who has neurofibromatosis – a rare skin condition that causes heavy tumors to grow on nerve tissues – got to know about and eventually met Dr. Cris Barrios, a trauma surgeon at UCI Health that provided him with the medical relief he had long been praying for.

“I was living with fear and with a complex and was just full of fear,” Galvan told Fox News, through an interpreter. “It was very difficult.”

Galvan, pictured before his surgery, started developing symptoms when he was just 5, which led to a childhood marred by bullying.  (UC Irvine Health)

There are three types of neurofibromatosis, which affects how nerve cells form and grow. The tumors are typically benign but can become cancerous, according to MedlinePlus.gov. Type 1 starts in childhood and causes skin changes or deformed bones. Patients with Type 2 may experience hearing loss, ringing in ears or poor balance, with symptoms typically appearing in teen years. A third type, called Schwannomatosis, causes intense pain for patients. Treatment is based on type and severity but may include surgery, radiation or medicines.

Through IMAHelps, Galvan arrived in California with his mother to prepare for last week’s surgery, which Barrios and his team donated. Barrios, who has been traveling to provide medical care for 13 years, had only operated on one other neurofibromatosis patient prior to taking on Galvan’s case, but he and his team were able to successfully do what no surgeons in Paraguay had done for Galvan before.

Galvan, pictured with Barrios and his care team, said he is looking forward to helping people in his community. (UC Irvine Health)

“We ended up removing about six pounds worth of extra tissue, which was really his primary complaint, just the weight and the inability to do things,” Barrios told ABC 7.

Now recovering at a friend’s home in California, Galvan said he is looking forward to returning home and helping his community in any way he can. He also said his faith on God helped him get through his darkest times, and he wants others to share in his faith.

“When I got closer to God, He is the one that helped me get over all this and to heal,” Galvan told Fox News. “I want to continue what I was doing in helping other people, and to make sure that other people are also going to get closer to God with me.”

Barrios will visit Galvan in July to check on his healing.

IMAHelps volunteers have treated more than 100,000 patients in Central and South America and have performed more than 2,500 life-changing surgeries.