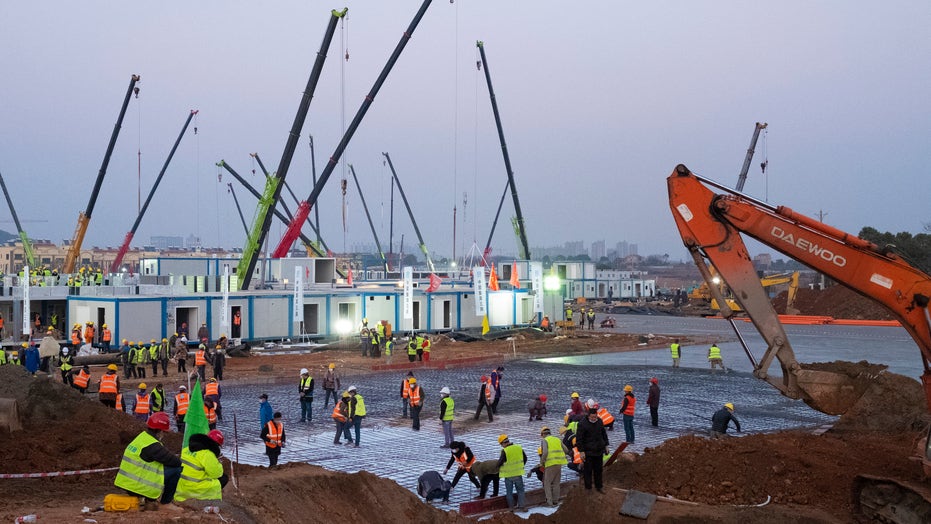 In a bid to address the soaring number of coronavirus cases in Wuhan and nearby cities, Chinese officials ordered the construction of a 1,000-bed hospital that they aim to have completed by Feb. 3. The plans, officials said, would follow a similar model to the hospital constructed in Beijing during the 2002-2003 SARS outbreak, which took a week to complete and wound up treating around 700 patients.

Chinese State Construction Engineering said it sent over 100 workers to the site to get started, and officials said they would be using prefabricated structures to create the hospital, cutting the time typically associated with creating new facilities.

PERSON-TO-PERSON TRANSMISSION OF CORONAVIRUS REPORTED IN US, CDC SAYS

“What’s different about these structures is that they are primarily designed using structural steel boxes, which allow them to be stacked on top of one another,” Grant Geiger, CEO of EIR Healthcare, told Fox News via email, comparing the structures to a custom-engineered shipping container.

Construction workers labor at the site of the Huoshenshan temporary field hospital being built in Wuhan in central China's Hubei Province, on Jan. 30, 2020.  (AP Photo/Arek Rataj)

Geiger, who is not involved in the Wuhan project but whose company is focused on building smart hospitals in less time and money, also said that a facility being constructed as part of an emergency response does not face the same regulatory tape that a typical new building would.

“A traditional inpatient hospital might take two-plus years to build because there are state and local protections in place such as zoning laws, code requirements, etc.,” he said. “In an emergency response situation, providing clinical care is paramount.”

And while typical construction may elicit visions of plumbers and electricians trying to match schedules with contractors, in this situation Geiger said that the structures typically come already equipped and pre-wired.

"In an emergency response program, a hospital is developed as a kit of parts and stored to be deployed when needed," he said. "Everything is already pre-designed and engineered to fit together.”

The virus, which has sickened more than 7,700 people and been linked to at least 170 deaths, is also transmissible between humans, and patients are largely kept in isolation to prevent the illness from spreading further. Geiger said the hospital will likely be equipped with special mechanical, electrical and plumbing systems to keep patients and workers protected from contamination.

He also said that the hospital will likely feature a specialized air filtration system that would have been planned out before the facility was even constructed.