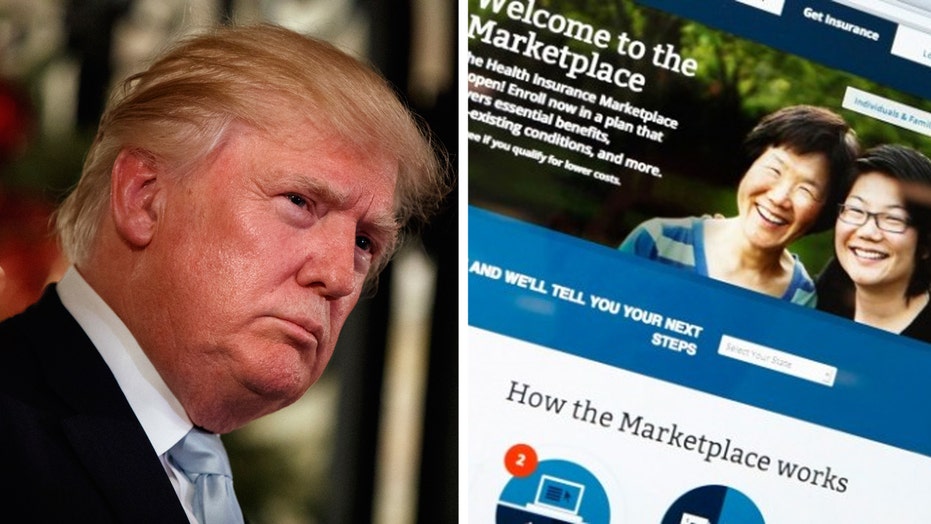 Trump vows to repeal ObamaCare on day one of presidency

Mere days away from his inauguration, President-Elect Donald J. Trump has threatened executive action to repeal and replace ObamaCare on his first day in office, fueling the fight between Democrats and Republicans over President Barack Obama’s signature domestic achievement. Repealing the policy without a replacement could leave as many as 20 million newly covered Americans without health insurance, experts estimate.

Fox News Channel’s Garrett Tenney reported Wednesday night that Trump’s declaration further raises the question of how Republicans will execute their plan, and what the new health care law may look like. Tenney reported that Trump’s team is looking at a number of executive actions he can take in the short term, and in the long term, Republican lawmakers are hard at work creating a replacement plan.

Vice President-elect Mike Pence spoke to press Wednesday, arguing the American people’s vote in the 2016 election indicates their stance on the issue.

“The first order of business is to repeal and replace ObamaCare,” Pence said. “It needs to be done, not just as a promise kept, but because in the course of this election, the American people had a choice, and the American people voted decisively for a better future for health care in this country.”

Tenney reported that sources say the goal is to have legislation for the new health care law on President Trump’s desk by Feb. 20, about a month after he takes office.

In light of his announcement, Obama is doing all he can to protect ObamaCare, which he and other Democrats have argued could be improved but should not be repealed. Tenney reported that Democrats have begun declaring that repealing the law would “Make America Sick Again,” nodding to Trump’s campaign slogan, “Make America Great Again.” Obama held a private meeting on Capitol Hill with fellow Democrats Wednesday, urging them not to stand down.

Rep. Nancy Pelosi (D-Calif.) told press Wednesday that she believes repealing the law would pose “a tremendous assault on the health security” and “financial security” of Americans.

Trump took to Twitter on Wednesday to state his case, saying ObamaCare is a “disaster” that has only led to massive premium increases and poor coverage.

“Massive increases of ObamaCare will take place this year, and Dems are to blame for the mess,” he wrote in one tweet. “It will fall of its own weight – be careful!”