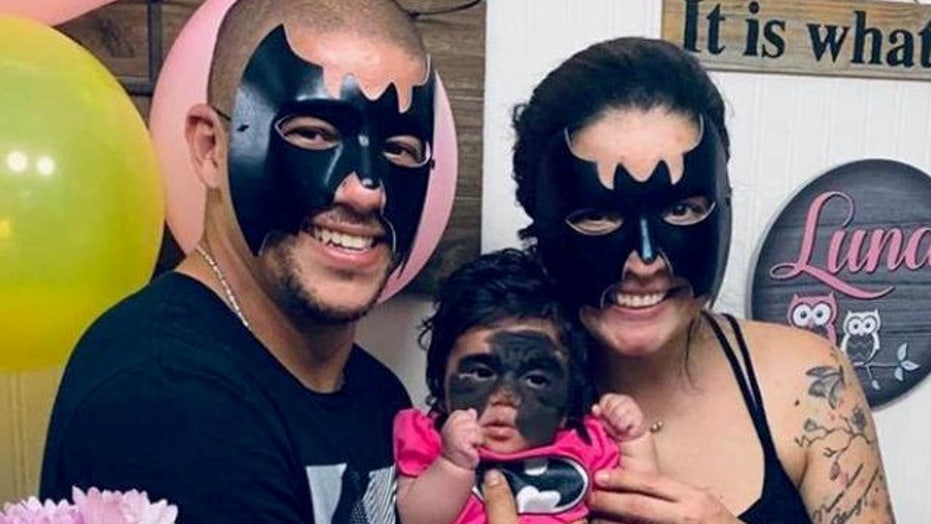 A Florida toddler who was born with a marking on her face that resembles a “Batman” mask will soon travel to Russia in the hopes of receiving an innovative treatment for a rare skin condition.

Luna Fenner was born with a congenital melanocytic nevus, “a skin condition characterized by an abnormally dark, noncancerous skin patch (nevus) that is composed of pigment-producing cells called melanocytes,” according to the U.S. National Library of Medicine.

Typically present at birth or soon after, the nevus — which can be anywhere on the body — grows at a similar rate as the child. Usually black in color, the nevus can be flat but can also be raised or bumpy. Excessive hair growth on the nevus is also common.

“Affected individuals may feel anxiety or emotional stress due to the impact the nevus may have on their appearance and their health. Children with giant congenital melanocytic nevus can develop emotional or behavior problems,” the National Library of Medicine states.

“The doctors in the US kept giving me different advice, I felt so lost, and didn’t know what to do," Carol, right, said of her decision to take Luna to a Russian doctor. (SWNS)

Those born with the condition are at a higher-than-normal risk for melanoma, a type of skin cancer. Congenital melanocytic nevus is extremely rare, occurring in about one in every 20,000 newborns in the U.S.

Luna’s mother, Carol, told South West News Service (SWNS), a British news agency, she was in “complete shock” when her now almost 7-month-old daughter was born, noting it took several days for doctors to determine what the marking was caused by.

“My last ultrasound before the birth had revealed nothing abnormal,” she said.

The 35-year-old mom said she has sought advice from numerous doctors across the country, from Florida to New York, as well as in Boston and Chicago.

“The doctors in the US kept giving me different advice, I felt so lost, and didn’t know what to do,” she said, noting many recommended laser treatments.

Luna has a rare skin condition which makes her look like she is wearing a superhero mask. (SWNS)

A surgeon-oncologist in Russia, Dr. Pavel Borisovich Popov, saw Luna’s story in a local paper and reached out to Carol and her husband, 32-year-old Thiago Tavares, in the hopes of helping the young girl.

“Everybody thinks I’m crazy to go to Russia, but I have done a lot of research and gained advice from several doctors and I really think that this is the best option for Luna right now,” Carol told SWNS. “[The doctor] said he had some options for Luna that weren’t available in the USA yet.”

In the hopes of bettering their child’s condition, Carol said she plans to travel to Krasnodar in southern Russia to meet with Popov. Her husband plans to stay in Florida to manage day-to-day responsibilities.

After an evaluation, Popov will perform six to eight surgeries on Luna over the next 18 months in the hopes of bettering her nevus. SWNS did not make clear what the surgeries will entail or why the treatment is considered innovative.

Each procedure is expected to cost $25,000, according to the outlet. An online fundraiser has been created for the family in the hopes of offsetting the high costs.

“I was in complete shock. When Luna was first born nobody in the room knew what the condition was," Carol said. (SWNS)

“It will be a huge relief if it works for Luna,” Carol said, noting she hopes the surgeries are completed before her daughter begins school.

“I don’t want her to get bullied. People ask if it’s contagious and say really mean things,” she said. “One time we were at church, and a girl sitting next to us said to her mother, 'Wow, look at her. What a monster.'"

Though the various comments have angered Carol, she now treats each situation as a learning opportunity.

“Now, I answer with the education I have regarding the condition," said Carol. But, she noted, “Sometimes I still get mad.”

“I will teach her how to deal with some bad comments and bad people," the mom added. "She is really strong. I need to prepare her.”