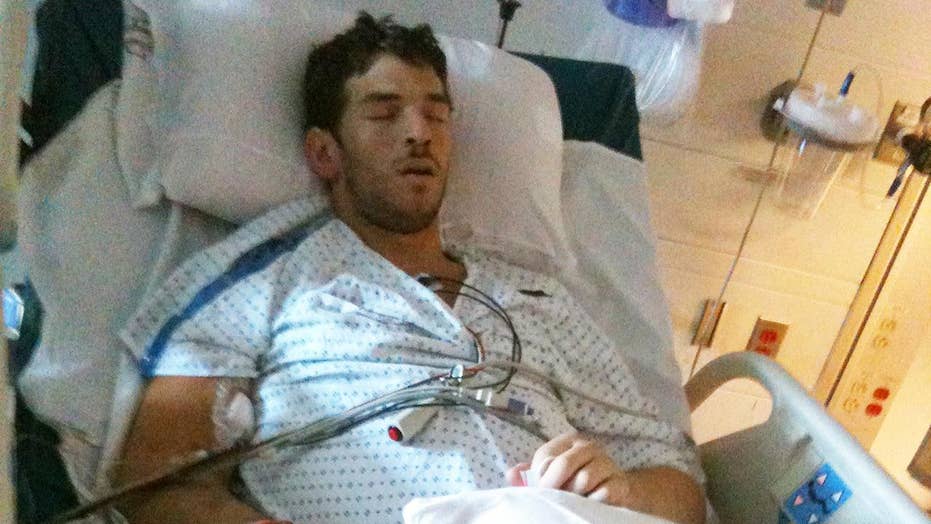 Dr. David Fajgenbaum was a third-year medical student when he suddenly fell ill and was diagnosed with Castleman disease. Determined not to give up on life, the doctor relapsed four times before he took it upon himself to find a cure for his disease. Fajgenbaum sits down with Fox News’ Dr. Manny Alvarez to talk about his miraculous journey of survival.

An otherwise healthy medical student wasn’t going to let a rare disease stop him from living life to the fullest.

Dr. David Fajgenbaum was in his third year of medical school when he got so sick he had to be hospitalized for five months. Doctors told him his liver, kidney and other organs were shutting down.

People who have Castleman disease can experience such things as flu-like symptoms and abdominal pain to the complete failure of multiple organ systems.

“The diagnosis took about 11 weeks, and most of that time I was in the intensive care unit,” Fajgenbaum told Fox News. “I had a retinal hemorrhage and went blind in my left eye. I gained about 70 pounds of fluid and I was so sick that I had my last rites read to me right around the time the diagnosis was made.”

Having a rare disease often means limited information and few if any treatment options.

When Fajgenbaum was diagnosed with Castleman disease there was only one drug currently approved by the U.S. Food and Drug Administration (FDA), but that he relapsed on, leaving him with no other therapy choices.

I promised my dad, my sisters, and my now wife that I would dedicate the rest of my life, however long that may be, to trying to cure this disease

“When I relapsed on the only drug in development and my doctor told me that there was nothing coming down the pipeline and there were no promising leads, that's when I promised my dad, my sisters, and my now wife that I would dedicate the rest of my life, however long that may be, to trying to cure this disease,” Fajgenbaum said.

Yet with the help of chemotherapy keeping his disease at bay, Fajgenbaum was able to finish medical school and propose to his college sweetheart. But instead of starting a residency, he founded the Castleman Disease Collaborative Network (CDCN), to “drive forward research internationally but also to begin conducting laboratory work.”

“We've made a lot of progress in the last seven years since I started the CDCN and we've invested about $1 million into research, which has led to an additional $7 million in external funding from the government and from non-profits,” Fajgenbaum said.

With experts collaborating together from around the globe and a “relatively limited amount of funding” Fajgenbaum and his organization identified the first novel drug target in 25 years.

“That drug target that we identified, I actually identified it in my lab using my own samples,” said Fajgenbaum, who is also an assistant professor of medicine in the division of Translational Medicine & Human Genetics at the University of Pennsylvania. “I started myself on this drug Sirolimus about five and a half years ago and I've been in remission ever since.”

Fajgenbaum was the first patient to try Sirolimus as a treatment for Castleman disease, but he and his team will test the treatment in a clinical trial scheduled to begin at the University of Pennsylvania later this year.

Fajgenbaum, now 34 years old, with a wife and 1-year-old daughter, chronicled his journey to a cure in a new book, “Chasing My Cure: A Doctor’s Race to Turn Hope into Action.”

“I wrote this book because there's lessons that I've learned about life, lessons about living from nearly dying five times, lessons that hopefully will inspire people to turn their hopes into action and create silver linings in the midst of tough times,” Fajgenbaum said.