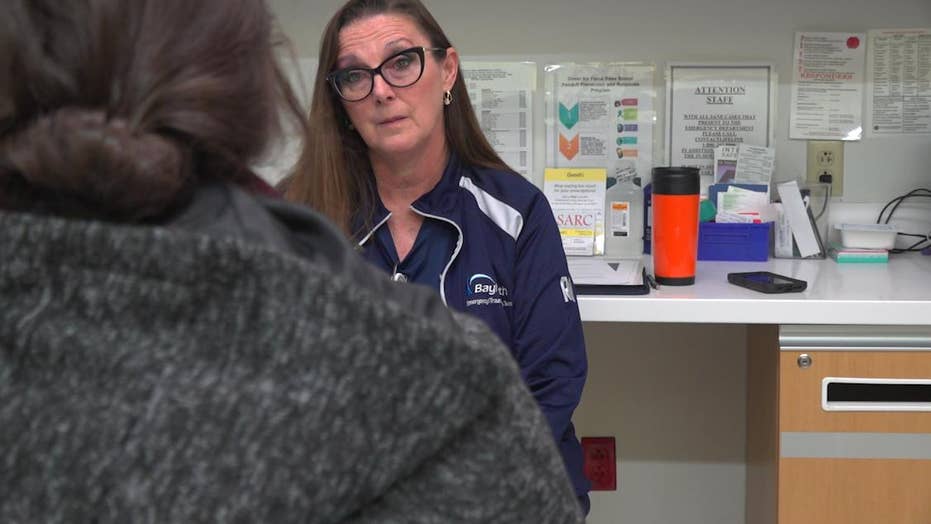 WILMINGTON, Del.-- Dawn Culp has been an emergency room nurse at Bayhealth for more than 25 years but says she never had enough resources to focus on human trafficking -- until now.

Throughout the hospital’s hallways are small stickers and flyers with the national hotline number for human trafficking.

Nurses and hospital are also asking questions to figure out if patients are smuggling victims.

As it becomes a growing issue, both in the U.S. and worldwide, hospital workers here are now in the front lines of the war on human trafficking.

HUMAN TRAFFICKING VICTIMS MOSTLY UNDERAGE CHILDREN FROM WITHIN US

Hospitals across Delaware are joining forces in a unique, new initiative to combat human trafficking. Medical professionals in the First State have adopted a set of guidelines to help better identify victims and provide a safe space for those seeking help.

A move Culp and her coworker, Annamarie McDermott, hope will make a difference.

“The first step, I think, for any healthcare provider, is to make and establish a relationship with someone, and begin to develop trust,” said McDermott.

The Human Trafficking Medical Committee, which both Culp and McDermott sit on, was formed in February 2018 at the direction of the Delaware Health Association Board of Directors to address human trafficking in the health care setting in Delaware. The group works with the state’s Human Trafficking Interagency Coordinating Council (the “HTICC”).

HUMAN TRAFFICKING VICTIMS RECOUNT TALES OF BEING FORCED INTO MODERN-DAY SLAVERY: 'IT WAS A LIVING HELL'

“Studies have shown that 88 percent of human trafficking victims were seen by a health care provider while they are being trafficked. Hospitals have a unique and important opportunity to identify and help victims,” DHA President & CEP Wayne A. Smith said in a press release.

Authorities say Delaware is one of many states along the I-95 corridor that have become a hotbed for traffickers, who can quickly ship victims to new zip codes up to and down the East Coast in as little as an hour. Advocates say the problem has not gotten the attention it deserves.

Yolanda Schlabach, a registered nurse and founder of a non-profit called Zoe Ministries, which was created to educate and help victims of human trafficking, said when she launched her organization in 2012 there was little awareness in the state.

“ I feel like it's an invisible crime. And I think that having protocols in place so that you can be cognizant is I feel going to make huge strides in helping save more lives,”

“In 2012, I learned Delaware had no arrest, no prosecution, and no discussion going on about the issue,” said Schlabach.

There have been 85 reported cases of human trafficking in Delaware since 2012, including 16 last year, according to the National Human Trafficking Hotline. Schlabach said she believes the number is far lower than the actual number of cases that occur in the state.

“We need stats,” said Schlabach, “Once people are aware of the red flags, people start to seeing it, and then the question becomes what can we do about it.”

Crystal, who says she was abducted at the age of 14 and spent months in captivity, is now a wife, mother, and business owners but says many stories don’t end up like hers. She recently began her won non-profit designed to teach survivors entrepreneurial skills.  ((Talia Kirkland / Fox News))

“ I feel like it's an invisible crime. And I think that having protocols in place so that you can be cognizant is I feel going to make huge strides in helping save more lives,” she told Fox News.

Crystal, who says she was abducted at the age of 14 and spent months in captivity, is now a wife, mother, and business owners but says many stories don’t end up like hers.

“No one should experience the trauma I endured,” said Crystal, “So if we can start by pulling someone out, I think that is a good place to begin.”

Each hospital in Delaware will work to implement the recommendations over the next year, making Delaware likely the first state to adopt a coordinated medical approach at combating human trafficking.

— Implementation of Human Trafficking Algorithm: A step-by-step process of recognizing and responding to suspected trafficking, including links to key resources.

— Use of ICD-10-CM codes for the data collection on adult or child forced labor or sexual exploitation: Utilization of the codes is key to collecting data on trafficking that will better streamline future response and help with the allocation of resources. Hospitals are encouraged to implement the codes with the help of the American Hospital Association fact sheet and training on the use of the codes.

— Use of the Juvenile Memorandum: The memorandum developed by the Child Protection Accountability Commission provides an overview of how to address instances when a suspected victim of trafficking is a minor.