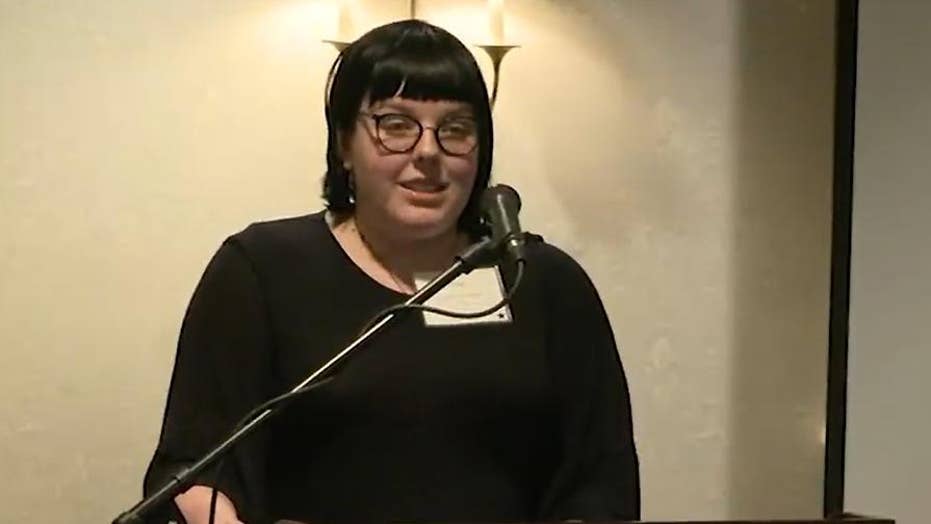 Advocate Kylee Gregg speaks about how she was forced into the horrors of human trafficking as a young child.

Kylee Gregg’s teenage years were spent drug addicted and abused – for years she was sold for sex by her neighbors.

“C,” another survivor, was bandied about the country in the back of a big rig, strung out and repeatedly raped by truckers across the nation.

In the coming weeks, you’ll read and see a series of reports where we interview the survivors of human trafficking as they painfully recount their harrowing experiences.

Fox Report Weekend Anchor Jon Scott and the Investigative Unit at Fox News were given unprecedented access, interviewed scores of trafficking survivors as well as advocates and law-enforcement officials who combat this problem on a daily basis.

Their stories are just two in a growing chorus of horrors experienced by teenaged girls and boys every day.

“C” who asked that her identity be withheld, recalled in a recent interview how she was forced into sex work when she was just a young teenager from a broken home.

The dark trade of human trafficking – in which people are traded or sold for the purpose of forced labor or sexual exploitation-- has been a persistent problem across major cities and idyllic rural communities in the United States for decades.

Recent years have shown awareness building around the issue, but many are still unaware of the true victims of trafficking. While many perceive most trafficking victims as foreign nationals smuggled into the country, an overwhelming majority of victims are born in the U.S.

“[The] average person seems to think it's a foreign national who’s come from really far away... But the truth of the matter is in the years that I've worked with survivors of trafficking over 90 percent are U.S. citizens...”

According to a report from the Department of Justice, 83 percent of sex trafficking victims were classified as U.S. Citizens and among all suspected incidents of sex-related trafficking in the US, nearly half involved victims under the age of 18. A separate report from The U.S. Department of Health & Human Services estimates that between 240,000 and 325,000 children are at risk for sexual exploitation each year.

For the past several months, the investigative unit at Fox News has examined the issue of human trafficking in the United States and what was uncovered may be shocking to most -- everyday Americans are sold into modern-day slavery, often at a very young age.

“[The] average person seems to think it's a foreign national who’s come from really far away. That they’re smuggled in illegally. But the truth of the matter is in the years that I've worked with survivors of trafficking over 90 percent are U.S. citizens,” Andrea Powell, founding President of Advocacy Group Karana Rising told Fox News during a recent interview in Washington, DC.

Jon Scott was also given exclusive access to the New York field office of the FBI, where he met with the agents of the Trafficking Task Force, which gave him an unprecedented look at their operations.

Assistant Director in Charge of the FBI’s New York field office, William Sweeney says that it’s the most vulnerable that are preyed upon -- and it often happens in plain sight. His field office operates a human trafficking task force in conjunction with the New York City Police Department.

“It was a living hell. I was on different substances and different drugs depending on the day,” said Gregg in an extensive interview with Fox News. “I had to have an illegal abortion when I was 11. That was performed on me by another girl who was in the trafficking ring. She was 13 and she had already had an illegal abortion herself earlier in her life.”

Gregg was only ten-years-old when she was befriended by a couple who seemingly wanted to help her escape an abusive mother. Instead, she lived her formative years in sexual slavery.

“[I]t was awful. It is like really terrible. And I feel like it's something that a lot of people think doesn't happen here. [That] it doesn't happen in their neighborhoods and it does.”

We also speak with those who are trying to combat the trafficking trade, from Law enforcement officials to advocates.

“My eyes have seen the little boys who have been so traumatized that they'll never be the same again,” Corporal Alan Wilkett with the Pasco County, Florida Sheriff, who works to combat trafficking in the Tampa region said to Fox News.

“[W]hen you realize the impact of what greed and this ungodly approach to this sexual activity, when you see the brokenness that it puts into these small girls, small boys, and adult men and women as well, you realize that unless we work together to really get this done-- we're going see a lot more broken lives before this is all over with.”

Tune into Fox Report Weekend with Jon Scott this Saturday at 6 pm Eastern to see the first in multi-part series on Human Trafficking.